Indy 500: Not For Faint Of Heart, Nor The Lactose Intolerant

In the month of May, Indianapolis Motor Speedway is where motor meets milk.

The Indianapolis 500 is not for the faint of heart--nor is it for the lactose intolerant. That’s because, for nearly 60 consecutive years, milk has been the ceremonial drink for winners of the 500-mile race.

It all started with one winner’s beverage request and has since become perhaps the most time-honored ritual of an event known for its annual traditions.

As legend has it, it’s all thanks to three-time 500 champ Louis Meyer. In 1933 Meyer had just won his second 500 at Indianapolis. According to Speedway Historian Donald Davidson that’s when Meyer asked for a glass of buttermilk.

“He said that his mother told him that milk would refresh him on a hot day—and for some reason it was buttermilk,” Davidson says. “He supposedly drank it in 1933 after winning, but there’s nothing to substantiate that photographically.”

But when Meyer won his third Indianapolis 500 in 1936, he requested another bottle of milk—this time it was caught on film.

“So supposedly that was in the news reels in the theaters within a few days and somebody within the dairy industry said look…that’s great,” Davidson says. “The Indianapolis 500 winner is drinking milk—kids think that’s a sissy drink and the 500 winner’s drinking it, so we have to make that happen every year.”

The drinking of milk occurred intermittently until 1956—the first year the dairy industry offered prize money. Since then, every single Indianapolis 500 winner has taken the sip, with one exception, which we’ll get to in a minute.

A.J. Foyt, Al Unser, Sr., Rick Mears—they have all drank the milk four times. Numerous others have taken the gulp more than once, including three-time winner Johnny Rutherford.

“Obviously when you’ve run 500 miles, and it’s been hot and you’re sweaty and you’re thirsty, you know, to come in and they hand you that cold bottle of milk, you know, it’s a great tradition,” Rutherford says.

Each year a Hoosier dairy farmer representing the American Dairy Association of Indiana hands the milk to the winning driver. This year that’s Alan Wright of All Wright Farms in Muncie—who says the milk won’t leave his sight during the race.

“It is something that we as dairy farmers and the Indy 500 takes very seriously,” Wright says. “So we do not sit it down and leave because there might be another cooler out there that someone picks up by mistake. And we want to make sure the milk stays with us because that’s what the winner wants and that we’re going to provide…winners drink milk.”

One's Denial Incurs Wrath of Many

But not every winner has chugged the milk without a bit of prodding—the dubious title of “500 Milk Refuser” falls solely on Brazilian driver Emerson Fittipaldi, who, in 1993, took his moment in Victory Lane to promote his own breakfast beverage interests:

Fittipaldi: No, I’m not going to have the milk.

Reporter: Now there’s a first. Emerson, you’re not going to drink the milk?

Reporter: Back in São Paulo, Brazil he produces orange juice, so he’s going to go that way…

Davidson says Fittipaldi ended up drinking the milk, but only after the cameras had been turned away. The belated swig didn’t matter—Fittipaldi’s popularity took an immediate hit.

So, on Sunday, one driver will be offered the sacred sip at the Indianapolis Motor Speedway, and they’ll probably accept. Because taking the pull is an acknowledgement of purpose and place—that no sip of milk at Indy tastes better than the one in Victory Lane. 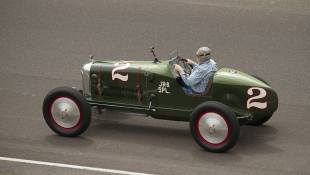 Throwback Thursday At The Track