Parked a few feet from the iconic pagoda at Indianapolis Motor Speedway is a reimagined E-Z-Go golf cart that’s essentially filled with garbage. Plastic bottles tossed into recycling bins months ago are now neatly stacked in rows — and they’re for sale.

The electric cart houses hundreds of Indy 500 T-shirts made from waste. The clothes are as soft as anything on the shelves in the regular merchandise stores and cost roughly the same. And it’s no coincidence they’re getting prime retail space, essentially located at the front door to the famed racetrack.

They’re the centerpiece of IndyCar’s latest push to go green, dubbed “The Penske Initiative.” The series is taking more and more steps – some bigger than others – toward holding carbon-neutral races by 2050. No, really.

What may have been considered a laughable endeavor just a few years ago now seems like a reasonable goal despite IndyCar’s truckloads of fuel and tires, as well as countless pollutants like emissions, chemicals and petroleum products. And that doesn’t include the waste that will come with hosting nearly 300,000 fans for the 106th running of the Indy 500 on Sunday.

“It’s baby steps,” longtime IMS President Doug Boles said. “It’s like hundredths of a second for the cars. It doesn't seem like much, but when you add up four or five changes, then all of sudden you’ve got a tenth of a second. That’s where we are. It’s lots of little things that at the end of the day hopefully make a big impact.”

That includes putting the traditional balloon release on pause because of environmental and wildlife impact concerns.

Here’s a look at some of the more notable ventures Penske Entertainment has undertaken to help combat global warming and do its part to wave the green flag on sustainability:

IndyCar will become the first North American racing series to use 100% renewable fuel in its race cars.

Shell, the longtime fuel sponsor for the open-wheel series, announced plans Friday to switch to a low-carbon fuel beginning in 2023. The new fuel will be a blend of second-generation ethanol derived from sugarcane waste and other biofuel, and it will create a fuel that is 100% composed of feedstocks categorized as renewable under the applicable regulatory frameworks. The oil giant says the fuel will decrease greenhouse gas emissions by 60% compared with fossil-based gasoline.

“You’ve got to be part of the solutions, and the way there is through these really potent partners who bring technology,” said Penske Entertainment President and CEO Mark Miles. “Carbon reductions come from great technology and innovators. We have both.”

Firestone has been working on a renewable tire since 2012 and is nearing the finish line to getting it on track.

The tire manufacturer created a research center in Mesa, Arizona, a decade ago and hired hundreds of biologists, chemists and botanists to help develop the guayule shrub. The guayule produces natural rubber and appears to be the future of racing tires.

Roughly 90% of the world’s rubber comes from Hevea brasiliensis in Southeast Asia. Harvesting those trees and getting the rubber back to North America is expensive and creates a heavy carbon footprint. It’s also subject to geopolitical instability.

The guayule is a cheaper, more sustainable alternative that renews itself in about three years and needs about 50% less water than other crops.

Guayule tires, distinguished by green-painted sidewalls, made their IndyCar debut during the Pit Stop Challenge on Friday. They will get a more significant test at the Music City Grand Prix in Nashville, Tennessee in August, when IndyCar will use tires made partially of guayule rubber.

“You don’t want to go straight to the Indianapolis 500,” said Cara Krstolic, director of race tire engineering for Bridgestone Americas Motorsports. “You want to get there in stages. One of the fun things about racing is every once and a while you get to showcase something that ends up in the car you and I will drive.” 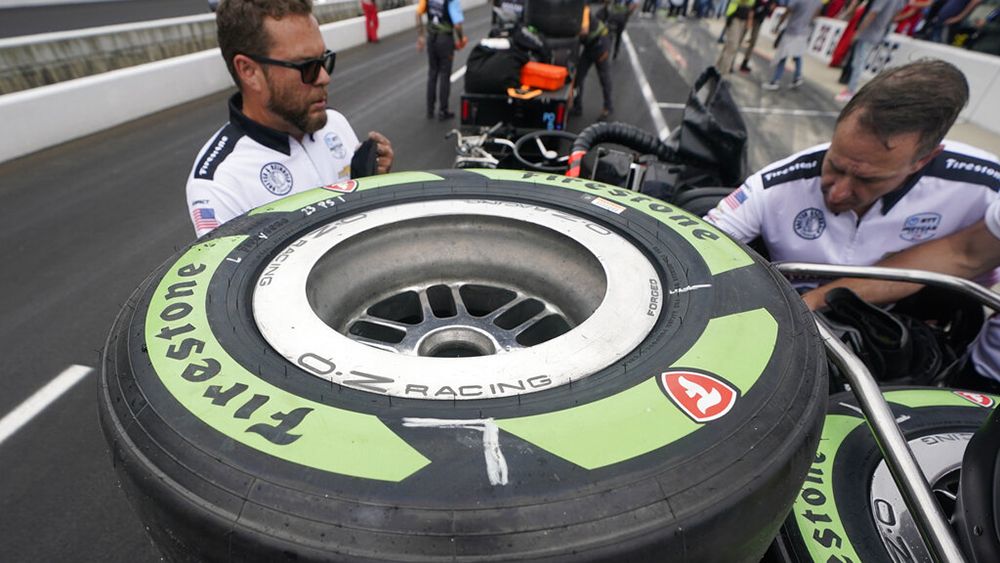 Penske Truck Leasing used two fully electric tractor-trailers to haul all the race tires used in May from Firestone’s distribution center. IndyCar installed a high-speed charging station at IMS that can get a truck close to fully charged in about three hours. The trucks made six trips to relocate 12 trailers filled with tires.

The expansion of electric tractor-trailers and the installation of more charging stations could be the next carbon-saving steps for a series that crosses the country regularly.

IMS installed a pilot program in May for collecting food waste and sending it to an off-site composting facility. Prepped and unused food, which in previous years would have gone in trash bins, is now being stored in a refrigerated trailer to be taken daily to food banks.

The electric golf cart filled with clothes made from recycling, though, has gotten the most attention at Indy this week. The cart has remained in one spot for the last two weeks, but officials plan to make it a rolling marketplace moving forward. It has a 50-mile range and comes equipped with an electric generator than runs LED lights and a point-of-sale device.

Each shirt is made partially from 6½ plastic bottles and uses water-based inks. There are five designs ranging in price between $32 and $35.

Tags:Indianapolis 500Indianapolis Motor Speedwaysustainability
Support independent journalism today. You rely on WFYI to stay informed, and we depend on you to make our work possible. Donate to power our nonprofit reporting today. Give now.