One seat for the Indianapolis Public Schools board of commissioners contested in Tuesday's election has yet to be called.

School board candidates critical of the current IPS administration are poised to make gains by ousting incumbent board members, as votes are still expected to be counted Thursday.

In District 5, incumbent Dorene Hoops lost to Taria Slack. Slack was supported by groups critical of the School Board – the IPS Community Coalition and I-PACE – the political arm of the state teacher’s union.

Chrissy Smith a leader with the IPS Community Coalition says the current board has not fostered community engagement. She hopes Slack will change this.

“Having people on the board who are willing to confront those things and to ensure those community-parent-board conversations and make engagement happen is going to be nothing but good for the future of IPS,” Smith said.

In the at-large race, there are only hundreds of votes separating Susan Collins from incumbent Mary Ann Sullivan. Collins holds a slight lead, but it’s still too close to call.

As a board commissioner, Sullivan oversaw the expansion of innovation schools.

In District 3, Evan Hawkins won the open seat with a little more than 50 percent of the vote. He was endorsed by Stand for Children, a non-profit that’s supported the current administration's policies.

“I hope the board, again, new members and old members do not get caught up in debating school type or other philosophies or agendas that simply don’t matter,” Ohlemiller said. “That is more driven by adult interests than the interests of children.”

Wednesday evening a spokesperson from the Marion County Clerk’s Office said around 23,000 absentee ballots would be counted on Thursday.

Tags:Indianapolis Public Schools Boardelection 2018Mary Ann SullivanStand For ChildrenIPS community coalition
Support independent journalism today. You rely on WFYI to stay informed, and we depend on you to make our work possible. Donate to power our nonprofit reporting today. Give now. 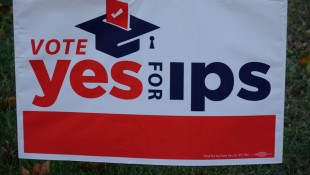