"Based on my review of the summary of feedback provided from the community along with my experience to date, I believe that I possess the qualities necessary to lead our district permanently," Johnson wrote in a statement.

Johnson says her experience as an educator and in IPS have prepared her to address problems in the district -- she highlighted issues around the defecit, academic performance and staff morale.

A report presented to the Indianapolis Public Schools board says commissioners should look for a superintendent with experience in an urban environment, connections to Indianapolis, and a successful track record.

Jesse Mendez, dean of the IUPUI School of Education, presented the report Monday night, which compiled 346 surveys from the district’s community input sessions and an online portal. The input was then used to write the district’s superintendent job description.

“So that was very loud and clear that they want someone local or at least was very much familiar with the different challenges facing Indianapolis,” Mendez says.

In the meeting, the board decided to move job requirements regarding a candidate’s experience as a teacher, school administrator and district leader into a preferred category instead of a required category. Commissioners said they don’t want to limit qualified candidates.

The report notes a split between the survey-takers when it comes to the district’s portfolio model, which includes innovation schools, charter schools, and traditional public schools. The continued implementation of innovation schools in the district has risen as a point of tension in the superintendent search.

“While there may be individual board members who hold specific opinions on to expand or contract on portfolio, it's going to be a superintendent who is going to make the right decisions for what the school system’s doing right now,” IPS board President Michael O’Connor says.

One question in the survey asked responders to name the district’s biggest challenge – the most common answer was “equity.” Responders noted a need for bilingual support and closing IPS’ “achievement gap.” This comes in the wake of data that shows the district’s enrollment in high-demand magnet programs doesn’t mirror its overall demographics.

Another topic discussed Monday night was how much of the application process would be public information. Some commissioners said the names of all qualified applicants should be public.

“Our community has requested full transparency,” Commissioner Evan Hawkins says. “If this is a role you want,  you’ve got to step up and own it.”

While other commissioners say a fully transparent process would stop interested candidates from applying for the job.

Commissioners ultimately decided only the final candidates' names would be made public. They will take part in a public interview before the board decides on the next superintendent.

The job posting is expected to be posted online April 17 and close May 17. This pushes the predicted final selection of the district’s next superintendent from May to mid-June. 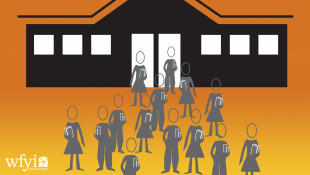 "The Takeover" is a radio documentary about Indiana's radical move to save failing schools. In part one, which you can listen to above or read a transcript of here, WFYI education reporter Eric Weddle explores three private companies’ attempts to...