BLOOMINGTON, Ind. (AP) — Indiana University has renamed the North End Zone plaza at Memorial Stadium after George Taliaferro, the late Hoosier football star who was the first African-American drafted by an NFL team.

IU President Michael McRobbie announced the renaming to George Taliaferro Plaza at a celebration of life Saturday to honor Taliaferro, who died Oct. 8, 2018, at the age of 91.

A 1981 inductee into the College Football Hall of Fame, Taliaferro was a three-time All-American and the leading rusher on the 1945 Big Ten championship team that went 9-0-1, the only undefeated team in school history.

He was selected in the 13th round of the 1949 NFL draft by the Chicago Bears and played six years for teams in New York, Dallas, Baltimore and Philadelphia, earning Pro Bowl honors three times.

Tags:Indiana UniversityfootballGeorge Taliaferro
Support independent journalism today. You rely on WFYI to stay informed, and we depend on you to make our work possible. Donate to power our nonprofit reporting today. Give now.

The Far Eastside of Indianapolis has faced years of social disadvantage as it struggles with poverty and violence. But a community leader hopes that will change with the opening of a new arts and cultural center. But there’s only one thing still preventing it from opening: the COVID-19 pandemic.
Read More 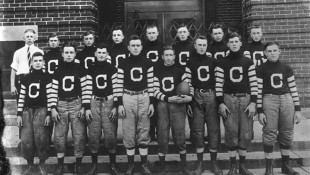 The National Football League is using this years Draft to celebrate its 14 original teams. One of those, surprisingly, hails from Muncie.