Experts say the violence is rooted in the failure of a two-state compromise between Israel and Palestine.

Efforts to settle the area known as Palestine with Jewish settlers began in the late 1800s, according to Abdulkader Sinno, professor of Middle Eastern studies at Indiana University’s Hamilton-Lugar School of International Studies.

“It seems Palestinians were never consulted; they were never treated as equals. The Zionist project imagines that that land was empty,” Sinno said.

Tension between Israeli settlers and Palestinians began escalating after the state of Israel formed in 1948.

The Palestinian Authority controls dozens of islands carved out within Israel in an area known as the West Bank.  It is led by President Mahmoud Abbas.

“Abbas is in the 16th year of a four-year term. So, that already tells you something about Mr. Abbas,” said Alvin Rosenfeld, director of the Institute for the Study of Contemporary Antisemitism at IU.

Timeline: Israel-Hamas Fighting Takes A Dire Toll With No End In Sight

Rosenfeld said Abbas called off elections recently because warring factions within the Palestinian Authority are jockeying for power.  That includes the militant organization Hamas, which controls the Gaza strip.

For the past two weeks, Hamas has launched rocket attacks against Israel.

“Hamas is not Israel's equal militarily, it will lose, there's no question about it,” Rosenfeld said. “But on the other hand, because of all the civilian casualties that result, and most of this is the result of Hamas hiding its weapons, and firing them from very populated civilian areas.”

But after Rabin was assassinated in 1995, efforts for peace between Israel and Palestine deteriorated.

Sinno said a rightward shift in Israeli politics over the past two decades also contributed to the failure of a two-state compromise.

“There were a lot of spoilers, both among Palestinians and among Israelis who did not want a document to be reached, we're not satisfied with it,” Sinno said. “People wanted to have everything, not just a part of the cake.”

Rosenfeld counters that Palestine rejected several generous offers for independence by Israel over the past several years.

Tags:IsraelPalestineIndiana University
Support independent journalism today. You rely on WFYI to stay informed, and we depend on you to make our work possible. Donate to power our nonprofit reporting today. Give now. 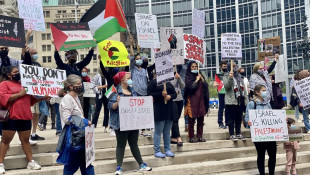 The protest was organized by the IUPUI and Butler University chapters of Students for Justice in Palestine and the Indiana chapter of Jewish Voice for Peace.