INDIANAPOLIS (AP) — The executive vice chancellor and chief academic officer at Indiana University-Purdue University Indianapolis has been selected to succeed Charles Bantz as the school's next chancellor.

Indiana University President Michael McRobbie announced Thursday that Nasser Paydar will become IUPUI's fifth chancellor on Aug. 16. He described Nasser as an outstanding academic and an energetic, able leader who has a deep understanding of IU's goals and mission.

He has been an IU faculty member for nearly 30 years and has held various administrative and executive leadership positions since he joined IUPUI in 1985 as an assistant professor of mechanical engineering.

Bantz was chancellor at the university for 12 years. Bantz will be taking a one-year leave before returning to IUPUI as a member of the faculty.

A mother is upset with an Indiana school after a staff member gave a haircut to her son who is autistic.
Read More

Indiana schools will get nearly $2.6 billion, targeted to those that serve more low-income students. The money offers an unusual test of whether spending more on education will improve outcomes for children.
Read More

The superintendent of the Washington Township Schools districts is asking for the community’s help to end violence after a North Central High School student was stabbed with a knife by another student on the campus Wednesday morning.
Read More 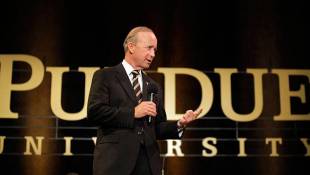 Purdue University President Mitch Daniels says the high school would be a pipeline for low-income, first-generation and minority students to enroll at Purdue's West Lafayette campus after graduation.