Jail Overcrowding Exacerbates Problems For Those With Mental Illnesses 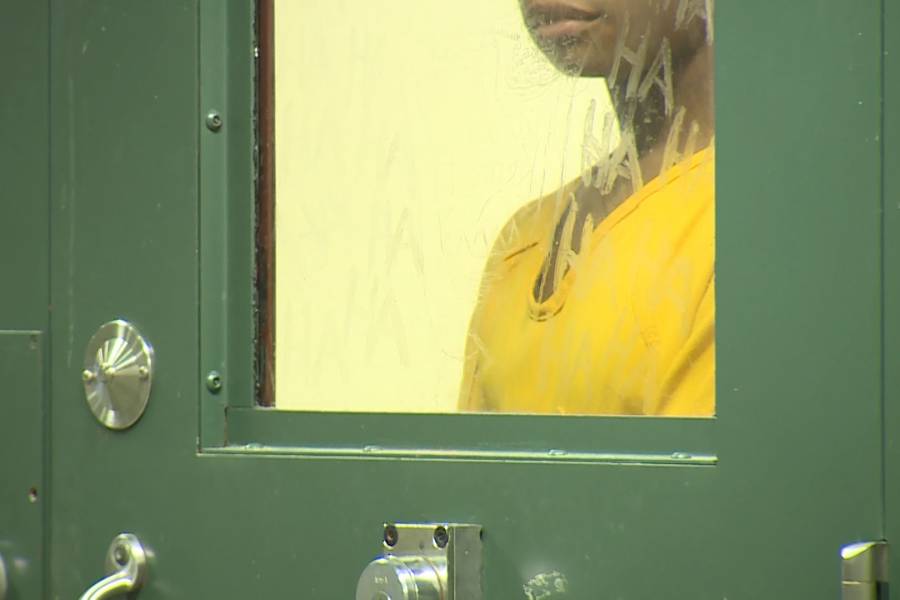 Many of Indiana's jails are already overcrowded, and don't have the staff or room to provide necessary services to those with mental illnesses. (Steve Burns/WFIU-WTIU News)

The National Alliance for Mental Illness says about two million people with mental illnesses are booked into jails every year.

But most counties aren’t properly equipped to treat those people while they’re in custody. The problem is especially big in Indiana, where many jails are housing far more inmates than they are supposed to. 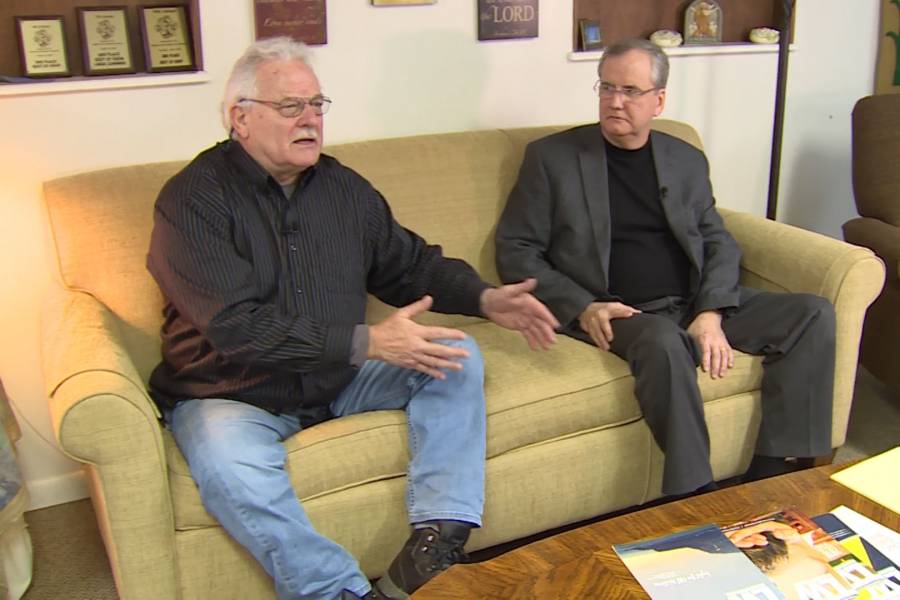 Rodney Sellers and Jeff Pflug say the criminal justice, mental health and legislative systems need to collaborate to help those with mental illnesses and their caretakers. (Steve Burns/WFIU-WTIU News)


The small Faith Lutheran Church in Madison, Ind. serves as a sanctuary to families in more than one way.

The community room inside is filled with several long tables and chairs. The church hosts various events here, including family-to-family classes from NAMI.

"We get into how to communicate better with your loved one, learning resources," says Pastor Jeff Pflug.

The classes are how Pflug and Rodney Sellers met. They immediately bonded over their similar situations: both of them have family members with mental illnesses.

Sellers says his wife is bipolar, and has been committed several times. In many cases, he says he has to call police for help.

"Most of the time I've had police come and they seem to, for the most part, have no idea what they're dealing with," Sellers says.

He says officers don't often know what questions to ask, or how to respond. In some cases, his wife will appear fine when police arrive.

"They will take a few minutes to brief the person, 'Nothing I can do, see you.' So then you call them back two days later as she escalates and gets worse. And, the longer you wait, the more damage is done."

Pflug says he's had similar experiences. But, he considers himself lucky. In one case his son resisted arrest, but police didn't take him to jail.

"Instead they took him to the hospital," he says.

But that’s not the case for many Hoosiers suffering from mental illnesses.

'I’ve got to ask you to hold this person because we don’t know what to do with them.’ 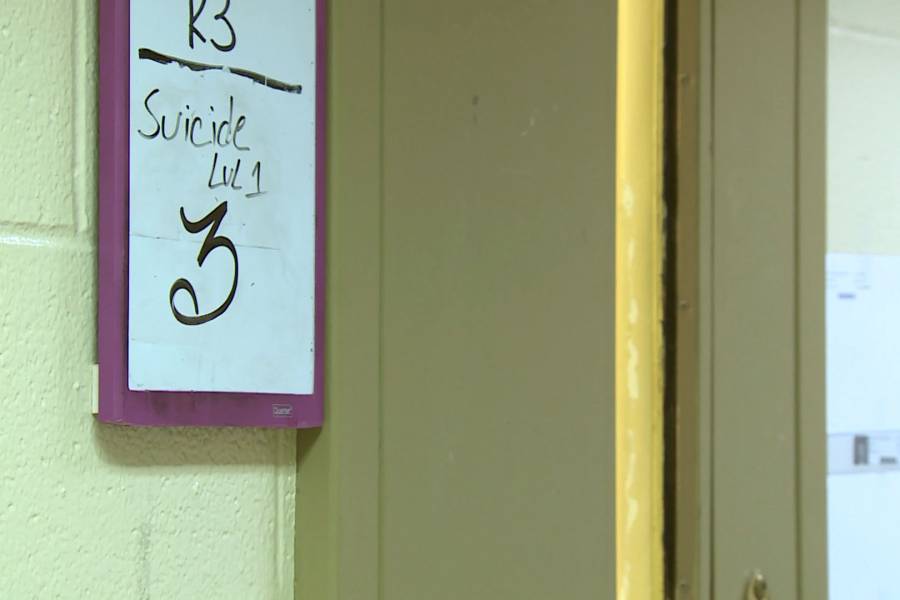 On this particular day, there are three women on suicide watch in a padded cell designed for one at the Hancock County Jail. (Steve Burns/WFIU-WTIU News)


Sheriffs across the state say an increasing number of people with mentall illnesses are ending up in county jails. In many places, they say it's because judges don't know where else to send them.

"I’ve had judges tell me ‘Sheriff, I’ve got to ask you to hold this person because we don’t know what to do with them,’" says Vanderburgh County Sheriff Dave Wedding. "And, if we release them, they’re a danger to themselves or someone in the community."

It’s a tough spot for counties to be in, because many of their jails are already overcrowded. While Vanderburgh County has a medical wing where it can house some inmates with mental illnesses, the resources are limited.

"You need personnel and you need capital to fix the problem," Wedding says. "You know I would love to have a wing on the jail where I could put my acute mentally ill inmates upon incarceration and then have a staff that would work with them, versus put them in jail and stripping them of all their clothing because they threaten to hang themselves or they want to kill themselves."

The problem is even more urgent at smaller jails, like in Hancock County.

On this particular day, three women who are on suicide watch are housed in a padded cell built for just one.

"You have a male and a female both suicidal at the same time, what do you do? You pick the one that you really believe?" says Jail Commander Keith Oliver.

Oliver says building a new jail where there’s more space for inmates would help. Plans for a new facility include a therapeutic and medical wing.

"Mental illness is a serious thing that we’re going to see for a long time coming and we have to find ways to adapt to that," Oliver says.

Multiple studies show the rate of serious mental illness among incarcerated populations is three to five times higher than the general population.

But some advocates question whether building bigger jails is the best solution.

Jasmine Heiss is director of outreach and public affairs strategist for The Vera Institute's In Our Backyards initiative. She says counties that are considering building larger jails are often devoid of other services.

"When you have a county that already does not have any kind of response, any kind of community-based response to people who are in some kind of crisis or who need help, who could benefit from services, your jail becomes the only answer," she says. "And then when you continue to invest in newer and bigger jails, then that just reaffirms that jail is the only hammer when you have any number of nails, or problems, that we’re trying to solve."

Sellers and Pflug say that’s not how it should be.

They’d like the state to take a comprehensive look at ways to improve mental health resources — and not just in jails.

"Law enforcement, God bless them, their hands are tied, they’re not equipped for this," Pflug says. "So, it belongs in the hands of our state legislature and our mental health communities."

Some Counties Taking Steps To Improve Mental Health Services For Those In The System
There are some counties that have systems in place to help address the needs of those with mental illnesses who come into contact with the criminal justice system.

Monroe County has a mental health court that hears certain felony cases. Prosecutors or defense attorneys can identify a potential case for the court, and then it's referred to a team for review. They look at several factors to determine whether it qualifies, including the person's criminal history. The team also gets releases from mental health providers and comes up with treatment recommendations.

If the case is accepted into the mental health court, the person pleads guilty and signs an agreement saying they will engage in case management and comply with treatment directives.

"Once they’ve sort of been stable, not in trouble, not having any violations for a while, they
will eventually go to unsupervised for a period of time," she says. "And, then if they can do that for a period of time without reoffending, then the case is dismissed."

Oliphant says the court's had 11 successful graduates, with only one person reoffending. She says the process gets people out of jail sooner and avoids unncessary prison sentences.

"A lot of criminogenic behavior is based on a mental health issue that's either unregulated or just not medicated consistently," she says. "And, so, this sort of gives people the tools they need to figure out how to get the treatment, how to stay on their medications and therefore stay out of the criminal justice system."

Indianapolis police are also testing a new screening tool to try and connect people with treatment.

Officers can access the web-based tool through a phone or laptop. It gives them evidence-based information to help them determine the best way to resolve a situation. NYU's Criminal Justice Innovation Lab developed the program, which is the first of its kind developed specifically for police to use in the field.
Tags:mental healthjail overcrowding
Support independent journalism today. You rely on WFYI to stay informed, and we depend on you to make our work possible. Donate to power our nonprofit reporting today. Give now.

The Dobbs v. Jackson ruling left abortion rights up to the states. As a result, lower courts in at least five states, including Indiana, have issued rulings in abortion-related religious freedom lawsuits.
Read More

As counties across Indiana grapple with exploding jail populations, some state lawmakers are looking at ways to give them relief. They're proposing changes that include directing more funding to counties and sending some felons back to prisons.