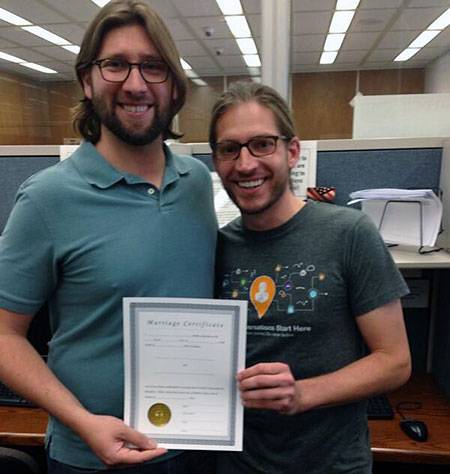 Craig Bowen and Jake Miller, who have dated for eight years, are now married.

Shortly after a federal judge struck down Indiana's ban on gay marriage on Wednesday, Marion County Clerk of Court Beth White tweeted that her office was ready to issue marriage licenses to same-sex couples.

Craig Bowen and Jake Miller were the first in line.

A federal judge on Wednesday overturned the state’s ban on same sex marriage – effective immediately – and couples across the state rushed to get hitched in case an appeals court stepped in to stop them.

“These couples, when gender and sexual orientation are taken away, are in all respects like the family down the street,” U.S. District Judge Richard Young wrote. “The Constitution demands that we treat them as such.”

But Attorney General Greg Zoeller said he would appeal the ruling quickly and ask for a stay, which could ban marriages until a higher court considers the issue.

The Marion County Clerk’s office started performing marriages right away and there was a line out the door of couples waiting for the service. Clerk Beth White offered simple civil ceremonies for couples for $50 voluntary contribution to Indiana Youth Group and erected a wedding arch. The office planned to stay open late to accommodate couples seeking a license.

Shortly after they heard the news, Craig Bowen and Jake Miller became the first same sex couple to marry in the county – and probably the state – when they got a license and had their ceremony in the clerk’s office.

“It felt right,” Bowen said of the couple’s decision to dash to the City-County Building after the ruling.

But other counties weren’t moving so quickly, in part because the forms they use for marriage licenses do not reflect a same-sex relationship status.

Lake County officials said they planned to wait at least a day until they received direction from state officials. Zoeller’s office said it would “communicate with county clerks on proper marriage license procedures they should follow in order to avoid chaos during the appeal.”

In Tippecanoe County, officials said they are also waiting for word from the attorney general before moving forward with same-sex marriage licenses.

Ken Falk, an attorney for the American Civil Liberties Union of Indiana, which filed the suit, said it’s unclear whether the new marriages would stand should an appeals court issue a stay. But he advised same-sex couples who desire to get married to do so quickly.

In the ruling, Young said Indiana’s state law banning gay marriage is unconstitutional and violates the due process and equal protection clause and therefore same sex couples cannot be prosecuted or denied a marriage license.

“It’s a historical day because people have been waiting a long time to have their love recognized,” said Kyle Megrath, the marriage coordinator for Hoosiers United for Marriage. “There will be a lot of celebrating today.”

Megrath said the group is waiting for more details about how the ruling will be enforced.

But Curt Smith, president of the Indiana Family Institute, said the group strongly disagrees with the ruling’s conclusion that “Hoosier voters and our elected officials have upheld marriage as one man and one woman because a bias against gays or what the court calls animus.”

“We believe very strongly that it is rational public policy to recognize that when a man and a woman come together, new life can result,” he said.

Already, 19 states have same sex marriage. In 11 of those, voters or state legislatures made the call. In eight others, judges ordered marriage open to same sex couples.

In another 12 states, judges have issued rulings in favor of gay marriages but the decisions were stayed as they were appealed, according to the national group Freedom to Marry.

Indiana Senate President Pro Tem David Long, R-Fort Wayne, said he hopes the federal court will respect Indiana law by “granting a stay to Judge Young’s ruling until the Supreme Court takes up this case and all the others like it around the country.”

“It is clear that the U.S. Supreme Court is going to have to rule on this issue, and the sooner the better,” Long said. “The current chaos over state marriage laws that is being created by these lower federal court rulings needs to stop, and only the Supreme Court can make that happen and bring clarity to this issue once and for all.”

Last summer, the U.S. Supreme Court struck down a federal law defining marriage as the union of a man and a woman and left it up to each state to make its own decision regarding the definition of a legal marriage. But since then, federal judges across the nation have been banning down state bans on same sex marriage.

“The court has never witnessed a phenomenon throughout the federal court system as is presented with this issue,” Young said in his ruling. “In less than a year, every federal district court to consider the issue has reached the same conclusion in thoughtful and thorough opinions.”

In the Indiana case, the attorney general’s office had argued the marriage-definition law should remain intact. State attorneys noted that the legislature has the legal authority to determine how marriage should be defined within Indiana’s borders and decided it should be in the traditional way – between one man and one woman. The legislature also decided not to legally recognize same-sex unions granted in other states.

But Young said in his decision that “excluding same-sex couples from marriage has absolutely no affect on opposite-sex couples, whether they will procreate, and whether such couples will stay together if they do procreate.” Those were among other reasons the state had given for restricting marriage to heterosexual couples.

Indiana has only banned same sex marriage in state law, not its constitution.

Lawmakers have passed a constitutional marriage ban several times – but never during consecutive, separately elected legislative sessions. That’s necessary to send the measure to the ballot for ratification for voters.

This year, lawmakers could have done so but opted instead to remove a second sentence that would have also banned civil unions in Indiana. The decision to alter the language meant that the multi-year process for amending the constitution started over.

“The decision is based on the federal Constitution and there’s nothing the state of Indiana legislature can do about this,” he said.

Indiana House Minority Leader Scott Pelath, D-Michigan City, has been fighting efforts in Indiana to put a ban on same sex marriage into the Indiana Constitution. He said Wednesday that “for years now, the people of this state have been dragged through what is turning out to be a completely unnecessary debate on matters that should be left to personal choice.

“The tide is changing across our country, as more judges and legislatures decide that we do not need to be involved with this issue,” Pelath said. “In Indiana, we need to take heed of this change. We need to stop this debate now. It is pointless to continue.” 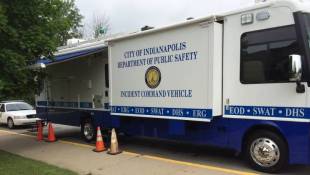 IMPD and other government agencies conducted a targeted sweep of a high-crime area along the thirtieth street corridor on Indy's north east side Monday and Tuesday.The coordinated effort led to several arrests.