Keeping Your HIV Status Secret Can Be A Crime. Experts Say That Hurts Public Health

Keeping Your HIV Status Secret Can Be A Crime. Experts Say That Hurts Public HealthIn many Midwest states its illegal for someone with HIV to have sex without telling partners about the illness. Some public health experts are pushing to change those laws.urlHIV2019-11-29T00:00:00-05:002019-11-29T00:00:00-05:00
Unable to load the audio player.
You could try direct download?
playpausemuteunmute
Original story from   WFYI-FM

In many Midwest states it’s illegal for someone with HIV to have sex without telling partners about the illness. Some public health experts are pushing to change those laws.

Graig Cote has had HIV for 33 years, and he wants everyone to know it.

"I disclose to everybody," he says. "I have my copper HIV ribbon on my neck. I wear my 'silence equals death' t-shirt. I’m a walking billboard."

Cote does this very intentionally, because in Ohio he could get up to eight years in prison for failing to disclose his HIV status to a sexual partner – a crime categorized as felonious assault.

That law was added to the books in 1999 on the advice of law enforcement. More than 30 states have HIV criminalization laws; some require disclosure when sharing needles. And Ohio is one of the top enforcers, with 35 people charged over the last decade.

"A lot has happened since 1999, and lawmakers don’t necessarily know that," says Daphne Kackloudis, the chief public policy officer at Equitas Health.

Kackloudis is part of the Ohio Health Modernization Movement, a group working to change the law.

"Let’s be honest, a lot of citizens who aren’t lawmakers don’t know the advances that have been made in science and the reasons we believe this law should be modernized," she says.

Kackloudis says drug development helped turn HIV from a fatal infection into a manageable chronic condition, to the point where a person could have effectively no risk of transmitting HIV.

The Centers For Disease Control and Prevention recently announced that if people take antiretroviral drugs as prescribed, the amount of HIV in their blood can become undetectable. If it stays undetectable, they have little risk of passing the virus to a partner through sex, and can live long, healthy lives.

This past June, the American Medical Association called for the total repeal of HIV criminalization.

Kackloudis says her group isn’t going that far – it wants to reduce the charge from a felony to a misdemeanor. 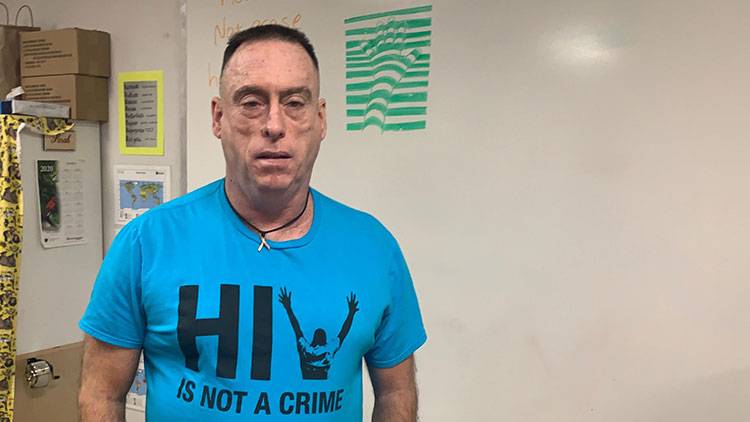 Graig Cote has had HIV for 33 years. (Photo provided by Graig Cote)

The statute has been challenged multiple times since it was introduced, including in the state's top court. In a 2017 Ohio Supreme Court case, Samuel Peterson argued on behalf of the state to defend the law.

As it stands, someone can press charges against an HIV-positive partner, even if they haven’t contracted the virus themselves.

Kackloudis says she understands the impetus behind the law. "We would never want someone who intentionally transmits HIV to not be able to be prosecuted under the statute. We think that’s not right."

But health experts and advocates say the law puts an undue burden even on those who follow it, in part because it's hard to prove disclosure.

"You really can’t. Unless you have it written down, you have witnesses, it’s recorded," Cote says. "Even if it’s on the sites, like Grindr or all the sites, you can’t prove that somebody read that."

He says many people with HIV fear that a partner, or an ex-partner, may lie about whether or not someone disclosed. As a result, Cote says he has avoided being intimate with anyone for decades.

"Would you want to have to disclose your sexual practices and your personal health in front of a medical professional and your partner?" Kackloudis asks. "I don’t think anyone wants to have that difficult conversation in front of a third party in order to prove that they’ve had the conversation."

Because of that, Kackloudis says some people avoid getting tested at all.

"If someone doesn’t get tested, and doesn’t know their status, they can’t get prosecuted under this statute," Kackloudis says.

According to the CDC, of the 1 million people living with HIV in the U.S., 1-in-7 don’t know it. Cote says that’s a danger to public health.

"The dialogue has to start," Cote says. "The fear has got to be dealt with. We have to change the laws so people are not afraid to talk about it."

People like Kackloudis and Cote are starting a dialogue of their own – educating lawmakers at the Ohio Statehouse.

Tags:HIV
At WFYI, our goal is to cover stories that matter to you. Our reporting is rooted in facts. It considers all perspectives and is available to everyone. We don't have paywalls, but we do need support. So if unbiased, trusted journalism is important to you, please join us. Donate now.