A group of KKK members rallied in southern Indiana Saturday, but the event drew more people to counter the hate group’s message.

Fewer than 20 people showed up for the KKK’s rally in Madison, and on the other side of a metal fence surrounding the area, hundreds of protestors gathered. Protesters came from across the region, and several held signs with phrases such as “Love Trumps Hate.”

Some protestors, including the American Indian Movement’s Albert Runningwolf, came from Kentucky and brought others along. Runningwolf says his group alone brought more than 100 people.

“We’re here to show them in their face that we’re not afraid of them,” he says. “We’re out here protesting these guys who are screaming and yelling hatred, and this racism has got to stop.”

Several different organized groups showed up to protest the KKK event, as well as locals who live nearby. Many said they found out about the event online, and used social media to organize the protests.

“You have multiple organizations here for all different reasons but all coming together to protest inequality and the discrimination that the KKK does,” he says.

Police significantly outnumbered KKK members at the event as well. Law enforcement maintained a fenced perimeter around the area, and stationed officers at barricades entering the park next to signs saying no bags or weapons were allowed. KKK members were escorted to and from their gathering’s location in order to prevent clashes with protestors.

People familiar with the area say KKK members have hosted this kind of event in Madison annually for the past few years. 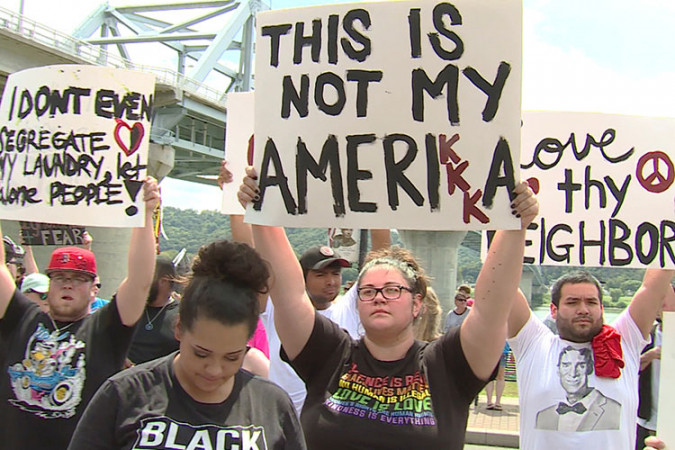 Tags:KKKMadison
At WFYI, our goal is to cover stories that matter to you. Our reporting is rooted in facts. It considers all perspectives and is available to everyone. We don't have paywalls, but we do need support. So if unbiased, trusted journalism is important to you, please join us. Donate now.