After being praised as essential during the pandemic, many service employees across the country are pushing for improved working conditions and higher pay. That includes Kokomo School Corporation, where bus drivers, custodians, and other support staff want a union to help make changes.

Rita Cline is one of several transportation employees pressuring Kokomo School Corporation to recognize a newly-formed union. She's lived in Kokomo her whole life, and has worked as a bus monitor for nearly a decade. Her job means helping kids with homework, keeping them safe on the bus, or talking them through a rough day.

"I think it was my calling through God, you know? I love working with kids," Cline said.

Cline is involved because her pay has only gone up by about 20 cents over time – it's less than $9 an hour. This year, Cline also missed out on hundreds of dollars in pandemic-related cash incentives offered to other school workers. Her job doesn't qualify.

"It was like a slap in the face, you know, it made me feel like I wasn't respected," she said.

It's not just about money, though. Cline said the district won't explain to her why her position doesn't qualify.

Others involved in the union effort point to staff shortages as a persisting problem – causing tension among employees and safety concerns for kids – and they want more communication from school leadership.

So far, it hasn't gone well for them.

People describe Kokomo as a "strong union town," but the school board voted this spring not to recognize the new union. It essentially means the school won't recognize a representative to bargain or negotiate terms of employment with.

Indiana law says the district doesn't have to.

Kenneth Dau-Schmidt is an Indiana University professor and expert on employment and labor laws. He said state lawmakers made a change about a decade ago that means non-teacher school staff are allowed to organize, but the district only bargains if it wants to and gets the final say on what that looks like.

There aren't many non-teacher school unions. AFSCME – the American Federation of State, County and Municipal Employees – is involved with just a handful in Indiana.

But Kokomo employees are pushing back on the school board's decision, even months later. They're showing up to meetings, asking to publicly address members about their needs.

Dau-Schmidt said the situation in Kokomo is unique, but not surprising. The COVID-19 pandemic is causing workers across the country to demand more from their employers.

"Employees would like to talk about what the wages and benefits are and how they're structured, especially things like child care and family leave and medical benefits," he said.

Unions also come with public influence. In 2019, Hoosier educators organized a massive protest to pressure state lawmakers and the governor into taking action on key issues like teacher compensation.

More recently, teachers have flexed their union power from the local to the national level during conversations about how to reopen schools during the pandemic.

Kokomo bus driver Heather Jackson said she and other staff deserve a seat at that table too.

"You know when we hear things it's always about the teachers, teachers, teachers – and they are extremely important. But without us getting the kids to school, they would have no students to teach," Jackson said.

Jackson said the goal isn't to steamroll the district – it's about working better with the district to find solutions. Jackson said drivers are leaving, and that strains remaining staff and lengthens the time kids spend on buses or waiting at a bus stop.

"Up to this point, we've tried and tried and tried, you know, to get a raise and different things, and until we started this effort none of that has happened," she said.

In June, the school board gave bus drivers a $2 hourly-raise and more flexibility with their pay schedules. The district said in a press release the board removed eligibility for new transportation hires to participate in Indiana's Public Employee Retirement Fund – a move that provided enough savings to offer the raises.

The release outlined challenges to substantial pay increases for any one department, citing inadequate state funding and ongoing funding losses caused by Indiana's property tax caps. Board President Crystal Sanburn said in the release she believes the changes are a "first step" in hearing the concerns of bus drivers and "responding appropriately."

Jackson said she appreciates the raise and pay schedule flexibility, but removing future hires from the retirement fund may make it even more difficult to recruit new drivers. She says the pay changes also don't address ongoing communication problems or issues for staff who aren't bus drivers, and union recognition remains a top priority.

So how does this impasse resolve?

Dau-Schmidt says a change to state law would do it, but isn't likely. Instead, he says what happens next is up to locals – whether it's the board deciding to reverse course, or employees campaigning to elect new school board members.

There's no telling what – if anything – might spur the board to reverse its original decision. A spokesperson says it was based on legal advice, but won't say more about it. Kokomo School Corporation officials would not provide comment for this story.

Now, employees are turning to the public for support, gathering signatures for a petition they plan to submit to the school board. They're hoping it pressures the board to reconsider.

Cline said she also hopes it shows the school system they're serious.

"We're pushing. And that's what we need to do, is keep pushing forward instead of going back," she said.

The group has collected hundreds of signatures so far, and are working on a plan to present them and address the school board at its next meeting.

Tags:unionsKokomoK-12
Support independent journalism today. You rely on WFYI to stay informed, and we depend on you to make our work possible. Donate to power our nonprofit reporting today. Give now. 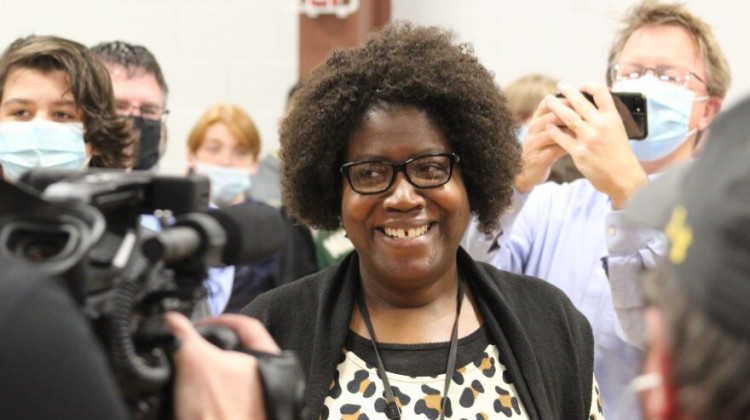 The Indiana Department of Education announced Tuesday that Tippecanoe School Corporation's Sharita Ware is the Indiana Teacher of the Year.
Read More