LAFAYETTE, Ind. (AP) — The principal of a Lafayette elementary school is among just seven nationwide being honored for their leadership.

The U.S. Department of Education says Janell Uerkwitz of Murdock Elementary School in Lafayette in one of this year's recipients of the Terrel H. Bell Award for Outstanding School Leadership.

When Uerkwitz became principal in 2006, Murdock Elementary was poised for a state takeover due to low test scores. By the 2011-2012 school year, the high poverty K-4 school received an "A'' school rating. In 2012, all of Murdock's students tested at or above proficient on standardized math tests and 97 percent tested at proficient or better for English/language arts.

The leadership award is presented by the Department of Education and three national associations for principals.

Tags:LafayetteJanell UerkwitzMurdock Elementary SchoolTerrel H. Bell Award for Outstanding School LeadershipU.S. Department of Education
At WFYI, our goal is to cover stories that matter to you. Our reporting is rooted in facts. It considers all perspectives and is available to everyone. We don't have paywalls, but we do need support. So if unbiased, trusted journalism is important to you, please join us. Donate now.

Christel House Indianapolis runs a network of charter schools. Like other city schools that serve vulnerable populations, it provides many students with food and connections to health and family assistance.
Read More 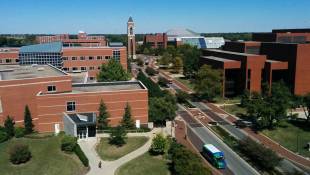 Ball State Students Return For Classes In August, But Go Online-Only After Thanksgiving

Ball State University students will return to campus for classes in August, but the university says it will send students home for Thanksgiving and continue online-only instruction through the end of the fall semester.
Read More