“So it really works on how we help out the area in terms of excavation, removing contaminated soil, restoration, and also relocating residents in the area,” Harris says.

Residents of a public housing complex in the Calumet neighborhood are being forced to find new homes. The neighborhood is a federal toxic waste clean up site. The soil there has levels of lead and arsenic more than 200 times higher than the legal limit.

Sen. Lonnie Randolph introduced a bill to aid East Chicago schools. That’s in part to help Carrie Gosch Elementary School, which was relocated last fall because it sits on land connected to the site. Harris introduced companion legislation for that bill in the House.

Harris is optimistic these measures will get support at the statehouse.

“Considering how much northwest Indiana did financially for the state over years and decades, there’s this situation where we now are coming back and saying, ‘Hey, we need some help,’” Harris says.

Tags:East Chicagoleadlead contaminationLonnie Randolph2017 legislative sessionEarl Harris, Jr.Frank Mrvan
Support independent journalism today. You rely on WFYI to stay informed, and we depend on you to make our work possible. Donate to power our nonprofit reporting today. Give now. 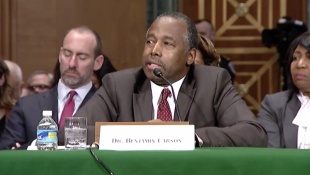 Housing and Urban Development Secretary-designate Ben Carson was answering a question from U.S. Sen. Joe Donnelly (D-IN) during his confirmation hearing before the Senate Banking, Housing, and Urban Affairs Committee.