An Associated Press review this week revealed Republican 9th district congressional candidate Trey Hollingsworth filed papers in at least five states that require him to live outside Indiana. A legal expert says there’s no financial incentive for doing so.

The AP revealed Hollingsworth is what’s called a “registered agent” for his company in at least five states. That means he must live in each of those states so legal paperwork can be served.

While Hollingsworth signed the paperwork that made him a registered agent, his campaign says the filings were a clerical mistake made by a former employee. Reporters weren’t allowed to ask questions about the controversy during a press conference Thursday, but WTIU/WFIU talked to Hollingsworth one-on-one.

“And I hate that, I hate that somebody on our team made a mistake,” Hollingsworth says. “But it’s nothing more than that.”

“I think it’s more likely that it’s just careless and sloppy,” Page says. “What most companies would do is they would just hire a company to serve as a registered agent.”

Page says the error amounts to a misdemeanor in most states.

Hollingsworth’s campaign says it’s filing the necessary amendments in all of the states involved to make sure the paperwork is correct.

Tags:Election 2016Indiana's 9th DistrictTrey Hollingsworth9th Congressional districtShelli Yoder
Support independent journalism today. You rely on WFYI to stay informed, and we depend on you to make our work possible. Donate to power our nonprofit reporting today. Give now. 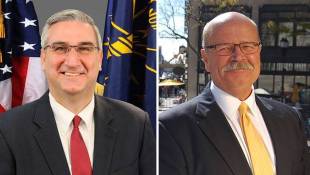