But efforts in legislative committees to undo Ricker’s move hit a snag when stakeholders pointed out that the proposed language could affect movie theaters, golf courses, bowling alleys and specialty food stores.

“The genie’s out of this bottle; I don’t know if we can put it back in. But we need to redefine the world of alcohol that we’re operating in right now,” Long says.

House Speaker Brian Bosma (R-Indianapolis) admits finding that redefinition in the remaining few weeks of session is difficult. He says the solution might be a moratorium on all new permits and a study committee on the issue later this year.

“The two permits that Ricker’s has received expire at the end of this year and the start of next year, so we may be forced to allow this for a while,” Bosma says.

Tags:beer2017 legislative sessioncold beer sales
Support independent journalism today. You rely on WFYI to stay informed, and we depend on you to make our work possible. Donate to power our nonprofit reporting today. Give now. 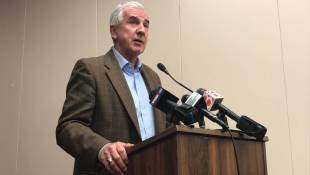 A convenience store's recent use of a legal loophole drew the ire of liquor stores and legislative leaders.