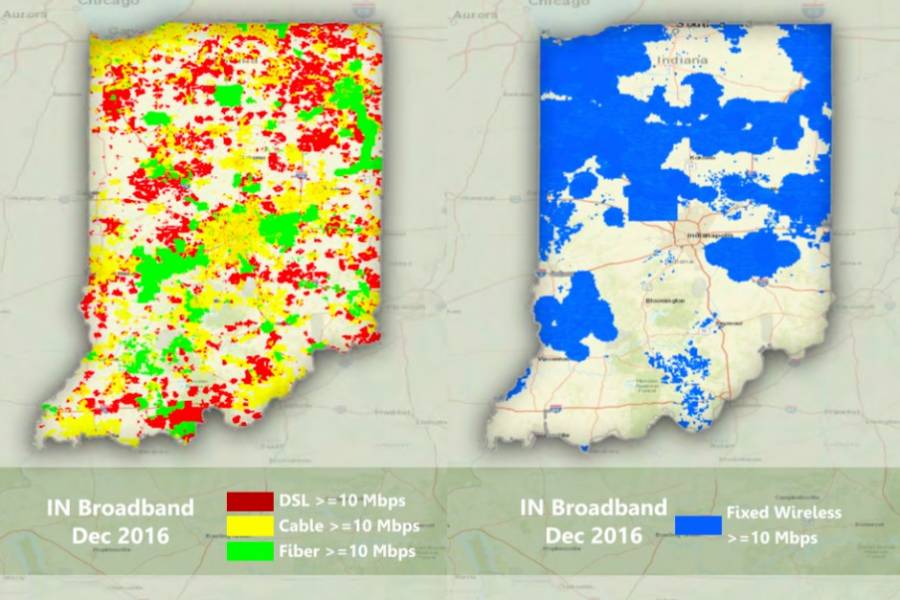 A map from the IBTA report that finds nine in 10 Hoosiers has access to high-speed internet. (Courtesy IBTA.)

A report from an Indiana trade organization claims nine in ten Hoosiers have access to high-speed internet. Yet, a number of legislators are not convinced enough is being done to address accessibility in the state’s rural areas.

House Bill 1065 was passed 10-0 through it’s committee hearing on Monday, and is expected to go before a full House vote by the end of the week. It attempts to lay the ground work for connecting rural areas across the state by defining standard speed for ‘broadband’ internet. Additionally, the bill will leverage additional funding to incentivize service providers, or ISPs, to enter less profitable areas.

But, if 90 percent of Hoosiers are served, why the urgency?

The Federal Communications Commission, or FCC, relies on census blocks, arbitrary areas the U.S. government uses to group residents of an area together.

And census blocks can be as large as 250 square miles, according to the U.S. Census Bureau.

Negele, a co-sponsor of HB 1065, says some ISPs have contracted the data in the report.

“This one fellow was quite frank,” she says. “He said, ‘we’re marked on the map that we’re providing service in this area, and I can tell you right now we’re not.’”

But the Indiana Broadband and Technology Association has no other data to go on for reports like the one that finds 90 percent of Hoosiers have high-speed internet.

“Obviously we would like to see continued progress and growth,” says IBTA President John Koppin. “There may be ways to improve [the mapping], but it’s the standard we have been living with for a long time.”

The FCC said they have no plans at the moment to change the current mapping procedures. However, Indiana legislators hope matching the federal standard of 25 megabits per second, while opening up potential revenue streams, will help alleviate parts of the problem.

“This has now become a utility, this is not a luxury anymore,” Negele says. “What we don’t want is to have second-rate service in rural parts of Indiana.”

Tags:rural broadband
At WFYI, our goal is to cover stories that matter to you. Our reporting is rooted in facts. It considers all perspectives and is available to everyone. We don't have paywalls, but we do need support. So if unbiased, trusted journalism is important to you, please join us. Donate now.