INDIANAPOLIS -- Communities and law enforcement agencies across Indiana are looking to the General Assembly for guidance on police body camera policies.

West Lafayette’s police force has been using body cameras for about a year. Chief Jason Dombkowski says he used resources from, among others, the Department of Justice and the International Association of Chiefs of Police when developing a policy for those body cams.  But he says, particularly on privacy concerns and redacting video, he’d like guidance from the legislature.

“You have interviews of victims and you have a public records request for that, there’s a balance that needs to be struck there,” Dombkowski said.

But Steuben County Sheriff Tim Troyer told a panel of lawmakers studying body cams that he opposes them altogether. Troyer says just the presence of the body cams creates what he calls “fear in our citizens.”

“They’re less apt to talk to that deputy about that incident in their neighborhood if they believe that that recording is going to somehow make its way to an unprotected environment or in the hands of other people,” Troyer said.

A study committee could have a recommendation in the coming weeks for a body camera policy the General Assembly can debate next session.

Tags:Indiana General Assemblybody cameras
Support independent journalism today. You rely on WFYI to stay informed, and we depend on you to make our work possible. Donate to power our nonprofit reporting today. Give now. 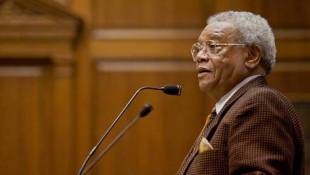 Former Indiana state Rep. William Crawford will lie in state in the Indiana Statehouse Rotunda ahead of his funeral this week.