The DigIndy tunnel project will detour many downtown commuters at the start of the new year.

Citizens Energy Group says Meridian Street will be closed at 28th Street Jan. 2 through Oct. 31 as crews work on an update to the city's sewer system designed to keep raw sewage from overflowing into Indianapolis' waterways.

Additionally, 28th Street will be closed east of Illinois Street to Pennsylvania Street for the same period. Detour routes will be posted beginning at 30th Street from the north and Fall Creek Parkway from the south.

Citizens says the project in this area will include two large sewers to capture and divert combined sewer overflows to the Fall Creek Tunnel, a portion of the 28-mile long DigIndy Tunnel System.

The DigIndy project isn't be the only construction commuters will have to deal with in the Fall Creek area over the next 18 months. The Indianapolis Department of Public Works and IndyGo are coordinating with Citizens to try to minimize disruptions caused by overlapping projects.

IndyGo's Red Line project will stretch along Meridian Street between 24th and 32nd streets through June 2019. 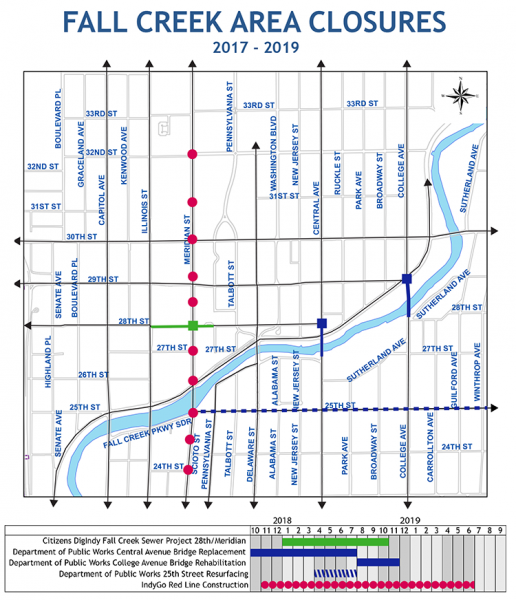 Tags:Citizens Energy Groupdigindycombined sewer system
Support independent journalism today. You rely on WFYI to stay informed, and we depend on you to make our work possible. Donate to power our nonprofit reporting today. Give now.

The new program to help Indianapolis residents facing eviction comes ahead of the expected expiration of the federal eviction moratorium on July 31.
Read More