Advocates included students and parents affected by the shooting at Noblesville West Middle School, and the mother of a 4-year-old who fatally shot himself after a babysitter left a loaded firearm unattended.

Moms Demand Action Indiana, the local chapter of a national gun safety organization, lobbied lawmakers to expand Indiana’s Red Flag laws, which give courts the power to remove guns from people who exhibit dangerous behavior. The group also supported a bill that would make it a crime to leave loaded firearms unsecured if children access them and are killed or injured.

The group criticized a bill to expand Indiana’s Stand Your Ground law, and a bill to allow people volunteering at a school with a house of worship or religious ceremony on school grounds could carry a handgun onto school premises.

Students Demand Action, a new branch of the organization formed after a shooting at a high school in Parkland, Florida, also lobbed at the statehouse. A senior from Noblesville High School Emily Cole told one lawmaker to think of them when voting on legislation.

Rep. Ed DeLaney (D-Indianapolis) approached the student advocates and says he admired their work to push a conversation about school safety.

“The public discussion, in my view has been impoverished,” DeLaney says. “Keep pushing us ... but let's push early and get it done.”

Gov. Eric Holcomb designated school safety a top priority for the 2019 legislative session. There are more than two dozen school safety related bills in the legislature this session, some filed in direct response to the Noblesville shooting. 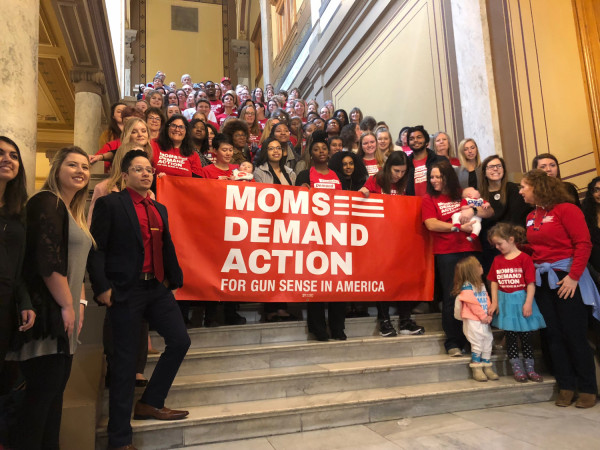 Tags:school safety2019 legislative sessionNoblesville West Middle School
Support independent journalism today. You rely on WFYI to stay informed, and we depend on you to make our work possible. Donate to power our nonprofit reporting today. Give now.