The baseball field at Muncie’s McCullough Park now sports a $1.5 million renovation and a new name.  And improvements aren’t finished yet.

Muncie marks the the 110th field project for the Cal Ripken, Sr. Foundation and the 15th one sponsored by Gainbridge, a financial annuity and insurance agency.

But only the newly minted Gainbridge Field at McCullough Park is CEO Dan Towriss’s home field – where he helped lead Muncie’s American Legion league baseball team to a state championship as a teenager.  Towriss says the field’s history should be celebrated.

The ball field played host to the 1943 spring training for the Pittsburgh Pirates, who were managed by Hall of Famers Honus Wagner and Frank Frisch.  Then in the late 1940’s, the Cincinnati Reds established the Muncie Reds minor league team, which used the field for several years until disbanding in 1950. 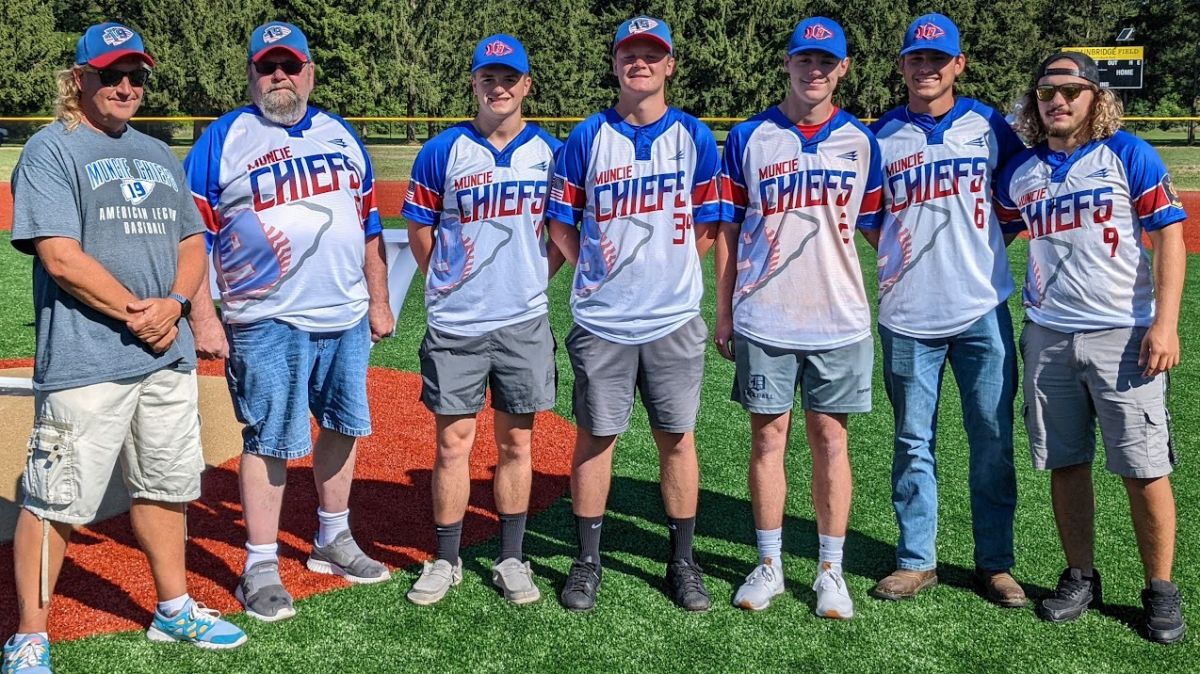 Through the foundation, Gainbridge helped sponsor the renovations, along with the city of Muncie and Ball State University.  Improvements include new synthetic infield turf, new scoreboard, field lights, and a warning track.

Hall of Famer Baltimore Oriole Cal Ripken, Jr. says for the foundation named after his coach and manager father, field improvements are secondary to programs that get kids involved in sports.  But those programs need a place to gather to teach their lessons, developmental skills, and what he calls “magic.”

At the field’s dedication on Tuesday, the foundation and Ball State had another announcement.  After the hot Muncie summer baked the newly re-seeded grass outfield, the organizations will join together to put in an irrigation system and new grass in time for next year’s baseball season.

Muncie Mayor Dan Ridenour said the project had been brewing since 2018.  He thanked the Muncie City Council for approving the city’s $500,000 initial contribution to the renovations.  Ridenour also pitched in money from the mayor’s EDIT fund, especially once costs for materials increased in the pandemic.

Officials also gave thanks to longtime local teacher and coach Francis Lafferty for rescuing the historic field the first time.  According to his obituary, Lafferty and friends personally restored the McCullough Park baseball field and founded a baseball league for adults that used the field for many years, as well as Burris Laboratory School’s baseball team and the American Legion.  Muncie’s mayor in 1995 formally dedicated the field in Lafferty’s name.  Lafferty mowed and repaired it regularly through 2012.  He died in 2014.

The Sierra Club has released its latest report ranking electric utilities based on their climate commitments. The rankings are based on utilities plans to retire coal plants, build enough renewable energy, and avoid adding new natural gas plants by 2030.
Read More

Two of the three candidates vying to become Indianas next Secretary of State will meet in a debate Monday. Republican Diego Morales continues to dodge public events that feature his fellow candidates.
Read More