Over the past few months, WFYI’s Leigh DeNoon has been collecting the stories of veterans healing the wounds of war through art making. Meet Navy veteran Kris Bertrand, who was sexually assaulted while in the military 25 years ago and has suffered bouts of depression for much of her life. For Bertrand, shaping a piece of clay at the potter’s wheel is an act of transformation.

“You can’t think. I mean, I can hold a conversation with you while I’m on the wheel – but I’m not thinking about – it doesn’t dwell up negative imagery for me,” Bertrand said. “This gets me through the day – this helps me feel better. You know, I wish I’d had this a couple of years ago.”

Kris Bertrand joined the Navy right out of high school – mainly as a way of escaping her abusive parents in Minnesota. After boot camp in Florida, Bertrand spent 4 years at the 32nd Street Naval Station in San Diego. Bertrand says back in those days, her commanding officers verbally harassed the women sailors. She was also sexually assaulted by men she dated while stationed there.

“I had a situation where I actually was drugged. But you can’t – if you try to report it, it’s, “You got yourself into it. You put yourself into that situation. It’s your fault. You deal with it,” she said. "And unfortunately, these things don’t happen just one time. It can happen multiple times. Unfortunately, for me it was also multiple times. I wanted to make it through my enlistment and leave and get out of there.”

Life outside the Navy wasn’t better. She tried living at home again, but the traumatic memories of childhood and the abuse she’d endured in the service drove her out. Between hospitalizations for depression, she sought relief in military homeless programs in Wisconsin and Missouri. And then, nearly a decade out of the Navy came a phone call, and a turning point.

“I had a really good friend, her and her husband had just moved back to Indiana, and they’re like, “Well why don’t you come out here? We’ll help you find an apartment. See if your job will transfer you. We’ll help you move.” So, I did. And again, it was another escape – but, this time it was a better escape,” Bertrand said.

In Indiana, Bertrand landed jobs with state agencies. First, with the Department of Workforce Development helping disabled veterans and then with the Indiana Department of Veterans Affairs. In 2008, she received the Hoosier State’s highest honor for women, the Indiana Torchbearer Award.  It recognized her efforts as an advocate for Indiana’s women veterans. When she lost her job in 2010, Bertrand went into a tailspin – one that only started to slow when she discovered art and ceramics.

“I also find it therapeutic just to throw a piece of clay. You know, just to literally throw it. Like, before you put the clay on the wheel you have to wedge it so you’re getting all the air bubbles out. So you have to literally beat this clay up and I find that’s been very therapeutic.”

“Engaging in the creative process is something that typically is going to be a life enhancing experience for you," King said. "It gets your blood moving - it gets your brain working in different ways. It helps you relax, it helps you get distance from what it is that you might be living with in your life at the time.”

King says art therapists are masters level counselors trained to use art to help clients find ways to express things they might not be able to say with words.

“Ceramics has been – she said that, you know, she agreed, it’s probably been the best thing that helped me.”

Today, you can find Bertrand at a potter’s wheel, shaping clay to cope with past experience that’s often felt out of her hands. 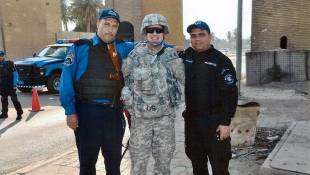 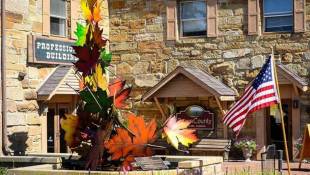 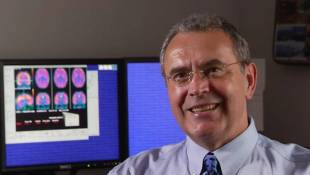 Brain Scientist Is A Believer In Art Therapy

A Chicago brain researcher is working at the intersection of art and neuroscience. Dr. Lukasz Konopka is offering hope and new insight for those suffering PTSD and depression.