Nearly 200,000 Residents in Marion County Are Hungry. What's The Solution? 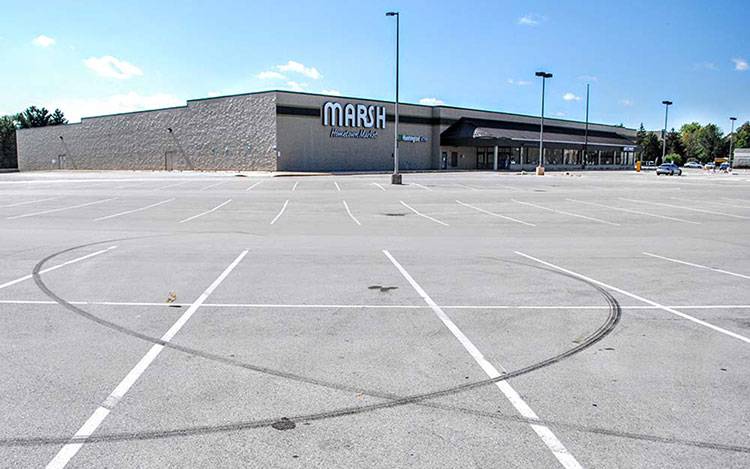 (Provided by The Polis Center at IUPUI)

Food insecurity received a lot of attention in this year’s Indianapolis mayoral race.

Candidates incumbent Democrat Joe Hogsett, Libertarian Douglas McNaughton and Republican State Sen. Jim Merritt all had different takes on how they would address hunger. And as they proposed solutions, more attention was also given to existing efforts.

Unai Miguel Andres is a data analyst at the Polis Center in Indianapolis -- a research unit at IUPUI. Last year, he created a digital map to show areas of food insecurity in Marion County.

“If you look at this map, the purple areas are those food deserts,” Andres says. “So those areas that have at least a 33 percent of the population, or 500 people, without access to food within a mile. They’re also low income.”

About one in every five Marion County residents live in a food desert -- an estimated 196,000 people in the county. The Centers for Disease Control and Prevention defines a food desert as an area lacking in affordable and healthy foods. These areas are low income and lack food access- they are generally areas where the closest retail grocery store is a mile away.

Indy Hunger Network is a collaborative impact coalition made up of both public and private anti-hunger organizations. Managing director Kate Howe says food insecurity is difficult to measure- there are a lot of variables when it comes to food.

She says someone in a food desert may have a car to drive to a store that sells fresh produce. Or, someone living next to a grocery store may not have enough money to buy food. It’s also hard to measure because it can change month to month.

“So, someone who's food insecure may have enough food today,” Howe says. “But when their paycheck runs out, or a bill comes due, or they have some unexpected financial stress, like a car payment, or, you know car accident or a medical bill that was unexpected, that can leave them with fewer dollars to put towards food.”

Howe says it’s a bigger problem than people think. Food insecurity numbers stay up, even if unemployment numbers go down.

“So, unemployment is pretty low in Indiana right now,” Howe says. “But what we’re finding is that people don’t have good jobs, they might work part time, or they might work minimum wage jobs, so they don’t have the money to buy their own groceries all the time. “

“I guess the thing that people need to realize is that food insecurity is really a symptom of poverty,” she says. “The best way to improve food insecurity is to help people do better economically with better jobs and better opportunities.”

So, Howe and others working on the problem press policy makers to strengthen programs that allow people to BUY food — like SNAP— the supplemental nutrition assistance program people call food stamps, which is not universally politically popular.

“The problem we are having right now is that the federal government is trying to restrict SNAP more and more,” Howe says. “And so we find ourselves rather than proposing new a new ways to improve the program working just to make sure that it's not degraded.”

SNAP buys about 50 percent of food assistance meals in the county. Howe says leaders need to fight for policies that will feed hungry people- give them more access to SNAP and make it easier for people to enroll.

“If they don’t have enough money, none of the programs are going to be sufficient,” Howe says. “So, if we really want to solve the problem, we have to improve everyone’s economic situation.”

Andres believes that food is a basic human right and that it should be treated that way.

“The fact that there's so many people that do not have access to a reliable source or that they cannot afford buying food, it kind of breaks my heart,” Andres says. “We should be looking at food in the same way we look at water, which is like a basic right that everybody should have access to.

“There's a lot of soup kitchens and emergency resources that help alleviate the short term need while a long term needs solution is being planned,” Andres says. “And those long term solutions are normally more driven I would say by policy and research.”

Research like his, which the Polis Center uses to educate the public and local politicians use to make policy decisions. This year food security is a primary focus. And he’s optimistic.

“I think there is an increase in speed in how many things are being done right now,” Andres says. “Food insecurity is a really complex issue. If someone comes to me and tells me we have this solution, I would not believe them. Because it has to be tackled from multiple angles.”

Tags:hungerfood desertsfood insecurityPolis CenterIndy Hunger Network
Support independent journalism today. You rely on WFYI to stay informed, and we depend on you to make our work possible. Donate to power our nonprofit reporting today. Give now.