Indianapolis Clowns Pitcher Mamie 'Peanut' Johnson Dies At Age 82Johnson was the last surviving woman to play Major League Baseball in the Negro Leagues. She was recruited to play for Indianapolis' Clowns after being denied a chance with an all-white women's team.urlbaseball, Mamie Johnson, Indianapolis Clowns, Negro Leagues2017-12-20T00:00:00-05:002017-12-20T00:00:00-05:00
Unable to load the audio player.
You could try direct download?
playpausemuteunmute
Listen on 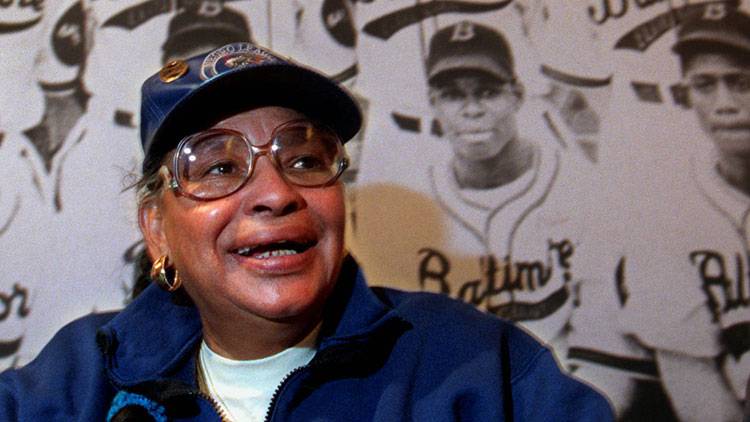 Mamie "Peanuts" Johnson, seen February 14, 1998, at the Babe Ruth Museum in Balitmore, spent hot, dusty summer days playing pickup baseball as a child in the 1940s and dreamed of making the big leagues. Johnson overcame rejection by the all-white women's league that began playing during World War II and became one of only three women to play in the Negro leagues. AP Photo/Khue Bui

Mamie "Peanut" Johnson was the last surviving woman to play Major League Baseball in the Negro Leagues. She was recruited to play for Indianapolis' Clowns after being denied a chance with an all-white women's team.

OK. Let's take a minute to reflect on the life of Mamie "Peanut" Johnson. She was one of just three women to play professional baseball in the Negro Leagues. She died yesterday at the age of 82.

Johnson was born in South Carolina. And she went to a tryout for the All-American Girls Professional Baseball League, you know, the one from "A League Of Their Own." But as Johnson told MORNING EDITION'S Bob Edwards in 2003, she and a friend were turned down because they were black.

MAMIE JOHNSON: They didn't let us try out. They just looked at us like we were crazy as if to say, what do you want?

GREENE: Now, Johnson said that looking back, she was glad about that because had she played in the women's league...

JOHNSON: I would be just another lady ball player somewhere. But now I'm proud to say I'm the only and the first lady major-league pitcher.

MARTIN: Mamie Johnson joined the Indianapolis Clowns in 1953 at the age of 18. She played three seasons and compiled impressive stats - a pitching record of 33-8 while batting .270. During her time in the Negro League, she played with some all-time greats.

JOHNSON: Mr. Satchel Paige, he was a sweet gentleman. He was kind enough to help me to perfect the curveball. I knew how to throw it, but the technique that he gave me helped me so much in my baseball career. And then I was, you know, I was able to strike a whole lot of fellas out there.

MARTIN: After retiring, Mamie "Peanut" Johnson worked as a nurse for 30 years and coached youth baseball. She was honorarily (ph) selected by the Washington Nationals in the 2008 draft.

(SOUNDBITE OF CINCINNATI POPS ORCHESTRA'S "SUITE (FROM THE NATURAL)")

NPR transcripts are created on a rush deadline by Verb8tm, Inc., an NPR contractor, and produced using a proprietary transcription process developed with NPR. This text may not be in its final form and may be updated or revised in the future. Accuracy and availability may vary. The authoritative record of NPR’s programming is the audio record.

Tags:baseballMamie JohnsonIndianapolis ClownsNegro Leagues
At WFYI, our goal is to cover stories that matter to you. Our reporting is rooted in facts. It considers all perspectives and is available to everyone. We don't have paywalls, but we do need support. So if unbiased, trusted journalism is important to you, please join us. Donate now.