It’s the middle of summer but Harrisburg Middle School is a hive of activity. Between summer school classes and renovations, it’s a little chaotic for counselor Brett Rawlings, who just wrapped up his first year at the school.

Harrisburg is a town of fewer than 300 people, midway between St. Louis and Kansas City. But the school also serves the surrounding area, which is primarily farmland. As the K-8 counselor, Rawlings is responsible for some 400 students, and he deals with a range of issues.

"Peer relationship issues, drama, rumors," are common, Rawlings says. "But I do also see a number of students that struggle with internalizing problems; could be anxiety, depression that sort of thing."

Rawlings works to make sure the students know he’s there. And he tries to leave time in his schedule for one-on-one or small group meetings. Rawlings has a personal stake in his work as well, having struggled with mental health issues as a teen growing up in a rural area.

"I really didn’t see the counselor much at all," he says.  "As a profession we’re trying to do a better job of being visible and making known to people what our role is and how we can help."

But with hundreds of students, it’s hard to keep track of everyone. So the school uses a checklist that all students and teachers fill out three times a year, with questions covering the issues Rawlings looks out for. For example, students are asked to what extent they agree or disagree with statements like, “In the past month I felt hopeless,” or “I like myself.”

"With that data, we’re able to see which students are self-reporting risk in these various domains," Rawlings says.

The questionnaire is part of a multi-year study in collaboration with the University of Missouri.  The university has a $10 million grant from the U.S. Department of Education for a national center that will build on that research.

This summer, the National Center for Rural School Mental Health held a kickoff conference in Missouri. It included partners from the University of Virginia and the University of Montana, and officials from rural school districts.

Dr. Wendy Reinke, a co-director of the center says one of its main goals is to equip teachers in rural schools, who often end up as the point people for their students’ mental health.

The center is expanding on research Reinke and her colleagues have done in schools like Harrisburg’s over the past few years.

"Some of the data collection tools that we use in our schools now just gather data around certain risk factors that we know can lead to later mental health challenges," she says. "So it’s really trying to catch students early before the mental health problems become engrained."

The challenge then is, even if they spot problems early, it can be hard to get students care. Fewer than 30 of Missouri’s 114 counties have in-patient psychiatric facilities, and even seeing a therapist can involve hours of travel from rural areas.

Reinke says one possible solution is telehealth -- treatment via computer. But the center will need to study the new technologies more. That’s something Emily Doolittle of the U.S. Department of Education is looking forward to.

"I’m really kind of waiting with my breath held to see like what does that really mean, because you hear that people have internet connections, broadband, but I know that can be somewhat limited in rural areas," Doolittle says.

Now Reinke and her team are refining their system for assessing students. She says the next goal for the center will be to pilot it with a rural school district in the fall.

In Harrisburg, Rawlings has his own goals as a counselor.

"My goal is just getting to know each kid, know every name of every kid, it’s a practical goal but it’s a tough one, to make sure that each student knows that there’s someone in the building that they can go to for help," Rawlings says.

With a national center based just a short drive to the south, Rawlings could have a place he can go for help as well.

Tags:mental healthrural school districts
Support independent journalism today. You rely on WFYI to stay informed, and we depend on you to make our work possible. Donate to power our nonprofit reporting today. Give now. 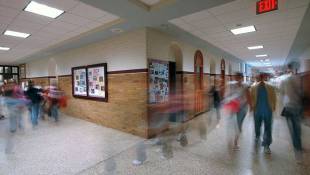 Teachers in Indiana are learning to spot the warning signs that students might be considering killing themselves and how to help pupils cope with classmates' suicides or attempted suicides.