No Money To Pay Teachers At 2 Failing Virtual Charter Schools

But even after she found a position at another school, Helms kept working for the troubled online schools at night, reviewing special education plans and helping students finish classes and transfer to new schools. Even as the schools began to collapse — their state funding cut off entirely — Helms felt strongly that she couldn’t leave students in the lurch.

“We were pretty sure we weren’t going to get paid,” she said. “They knew there were no funds a month ago. They simply wanted us to finish the job, because they knew we wouldn’t leave our kids high and dry.”

This week, Mary Jane Lapointe, an attorney for the two virtual schools, delivered the anticipated bad news: Teachers wouldn’t be paid for the work they did between July 15 and Aug. 15.

In the email to teachers Thursday, Lapointe wrote, “For those of you who have asked specifically whether [school founder] Tom Stoughton or any vendor will provide the funds, the answer is no.”

The missing paychecks for 38 teachers and a handful of administrators come as the state claims the schools collected $47 million more than they should have after over-reporting enrollment, and as federal investigators are examining the schools’ financial records.

Lapointe declined an interview request. Earlier this week, she asked Daleville Community Schools, the small rural district that oversees the virtual schools, for money to pay teachers and wrap up the schools’ closures. She told Daleville officials that she didn’t know why the schools had no cash balance and had run out of money.

It’s unclear how many students remain at the two schools, but Lapointe has estimated in a note to Daleville officials that “finishing and finalizing all transcripts for each and every student could take at least 3 months.”

In her email this week, Lapointe wrote that teachers, who are all independent contractors rather than school employees, were not expected to continue working and wouldn’t be paid if they did.

The online schools’ superintendent Percy Clark “has no additional information, so we ask that you not call him to complain since he cannot invent funds that are not there,” she continued, “and he is devastated by what has occurred.”

Lapointe told teachers to direct their complaints to the Daleville district, which owes the virtual schools about $650,000 in overpaid fees. Lapointe has asked for those funds to be released to facilitate the closure of the schools. But the repayments aren’t due until next month.

Donna Petraits, a spokeswoman for the Daleville district, said officials won’t make any decisions about those funds until after board members meet again Monday to vote on revoking the schools’ charters.

In an email statement, Petraits said that district officials are assisting students with transitions but “cannot provide assistance or guidance” to the unpaid teachers.

Helms and another teacher told Chalkbeat that even though they won’t get paid, they will help students for as long as they can still log into the schools’ systems. One of the largest concerns among students, families, teachers, and Daleville officials has been that the schools will shut down unexpectedly without providing student records.

“We don’t ditch kids like that,” Helms said. “It’s not fair to them at all if we don’t finish them up and get them finalized.”

Still, Helms said she felt like virtual school officials “tricked us,” taking advantage of teachers’ devotion to students. For weeks, as the virtual schools threatened to shutter without state dollars, teachers asked whether they would be paid but said they didn’t get a direct answer.

“Please help our students,” Clark wrote at the end of July in an email provided to Chalkbeat. “The expectation is that everyone will be paid.”

“No one ever said ‘stop working’ or released us from our contracts,” said Carrie Bennett, a counselor for the virtual schools.

Some teachers who did unpaid work could consider legal action, Bennett said. She’s unsure what she’ll do next. Since the school year has already started, it might be difficult for her to find a position at another school. But Bennett is a single mom, and without this last paycheck, she said she’s getting close to depleting her savings.

“For me, it’s been devastating,” Bennett said, “but I still did it, because of the kids.”

Tags:Daleville Community SchoolsIndiana Virtual Pathways AcademyIndiana Virtual SchoolCharter Schools
At WFYI, our goal is to cover stories that matter to you. Our reporting is rooted in facts. It considers all perspectives and is available to everyone. We don't have paywalls, but we do need support. So if unbiased, trusted journalism is important to you, please join us. Donate now.

Indianapolis Public Schools leaders announced a review of its police force in 2016, a process intended to improve accountability and data tracking, but it was never completed.
Read More 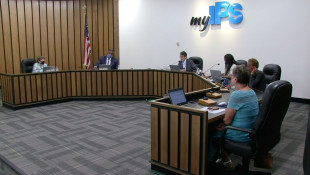 Indianapolis Public Schools leaders are leaning into their position on racial equity and racism and asking the school board to approve a policy approach that would more directly address institutional racism.