The University of Notre Dame has installed a system that takes non-consumable food waste out of its trash and converts it into energy.

The system is expected to reduce the University’s food waste by 10% campuswide.

On the kitchen end of Notre Dame’s system, dishwashers and bussers sort out what can be put into the system, it’s weighed, then it’s put through what is basically an industrial garbage disposal.

The system is in place at the Center for Culinary Excellence, where all the catering work at Notre Dame is done. More recently two new systems were placed at the North and South dining halls. The system works the same at all three places.

“It just goes through that and it’s mixed into the slurry and it goes out the pipe. And the really important thing is to make sure it’s a mixture of food,” says Susan Soisson, part of the team that does logistics for the sustainability initiatives at Notre Dame. 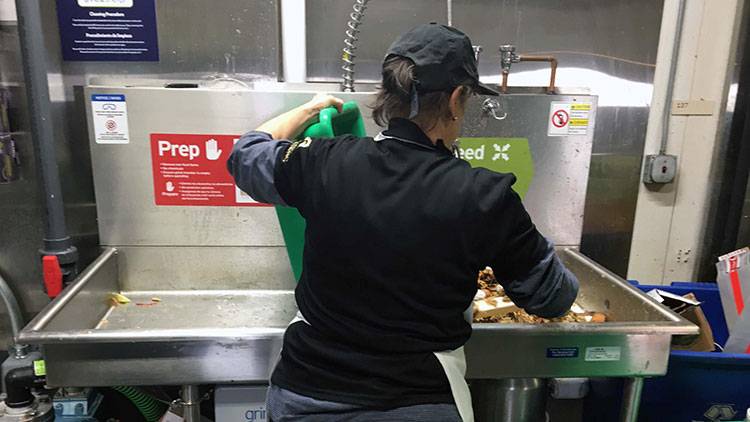 Susan Soisson scrapes food waste into the Grind 2 Energy System in the Center for Culinary Excellence at the University of Notre Dame on Thursday, April 11, 2019. (Jennifer Weingart/WVPE)

The program began after many students called for composting on campus. The question of whether that would work was put to chemical engineering student Matthew Magiera, who at the time was an intern at the Notre Dame Office of Sustainability.

“My first task was determining if composting was possible at all. And if not, what other solutions there were,” Magiera says.

And with the waste Magiera was seeing on campus daily, he was motivated to find the solution.

“One of the cups in the dining hall, if everybody filled up one of those with waste for every meal. So the scale of food waste is pretty tremendous," he says.

After some research Magiera found that composting was not the answer.

“We don’t have the raw material," he says. "We don’t use the product, and the labor and logistics cost would be pretty incredible.”

The solution: anaerobic digestion. That slurry that’s created in the garbage disposal is turned into three products.

“The gas product we can burn for energy. The liquid product we can sell to farmers as fertilizer, ‘cause it’s very rich in nitrogen," Magiera says. "And the solid product can be skimmed off and used as cattle bedding.”

The digesters are not at Notre Dame. They’re 30 miles south at Homestead Dairy in Plymouth. It's trucked in a sewage hauler from the university to the farm.

“The slurry will then be pumped into the digesters,” says Jill Houin, the resident educator and calf-raiser at Homestead Dairy. “And the digester has a big turbine that will spin and it’s self-generated so all the electricity that is generated is being produced here is also running itself.”

The retention pit where the slurry is dumped fills the air with a pungent mix of rotting food and manure.

It’s pumped into the digester where it creates the methane that’s used much like natural gas to power a set of generators on site. Houin says they sell the power to NIPSCO. It creates enough power for roughly 1,000 homes in Plymouth. 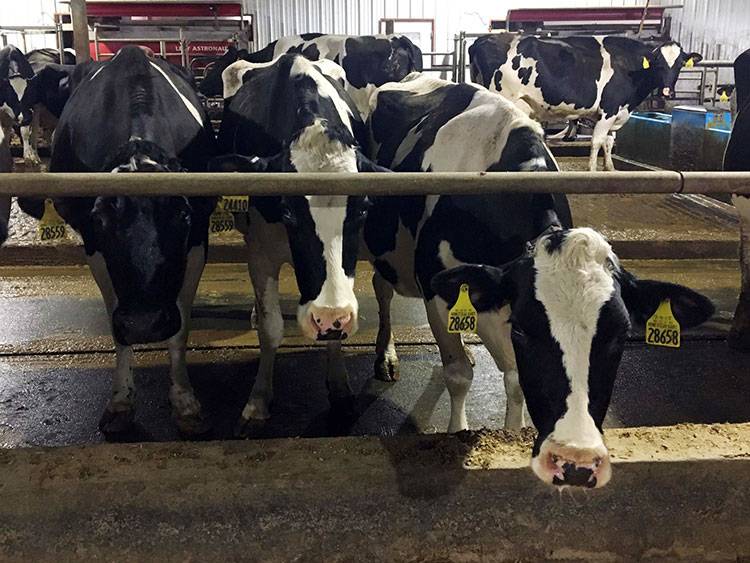 Cows inside the robotic dairy at Homestead Dairy come to the bar to see what's going on. (Jennifer Weingart/WVPE)

It’s not only Notre Dame that provides the slurry for the digesters. It also comes from the farm itself, and from other companies that work with the dairy.

And, the digester feeds other sustainability measures at the farm. The bedding is the repurposed manure solids from the digester and from a screw press.

Houin says says it's pressed, heated and dried, then used for the dairy’s 4,800 cows. “And that in turn will be scraped back and we re-used it in the digester.”

Homestead Dairy also farms 4,500 acres in corn or soybeans each year. And it has what’s currently the biggest robotic dairy operation under one roof in the United States

That’s where we ran into Floyd Houin, the farm’s patriarch. He summed up why the digesters matter.

“It’s good to keep it out of the landfills and get more value out of it,” Houin says.

Jill Houin says Homestead is glad to have the partnership with Notre Dame. And, like the university, the farm continues to up it’s sustainability game.

She says they’d like to have the energy created in the digester power the farm. It’s a democracy, she says, so the family will make further sustainability decisions together.

At Notre Dame, the digesters are just a part of the University’s overall goal to reduce all waste by 67% by 2030.

Tags:University of Notre DamesustainabilityPlymouthAgricultureanaerobic digestionrenewable energy
Support independent journalism today. You rely on WFYI to stay informed, and we depend on you to make our work possible. Donate to power our nonprofit reporting today. Give now. 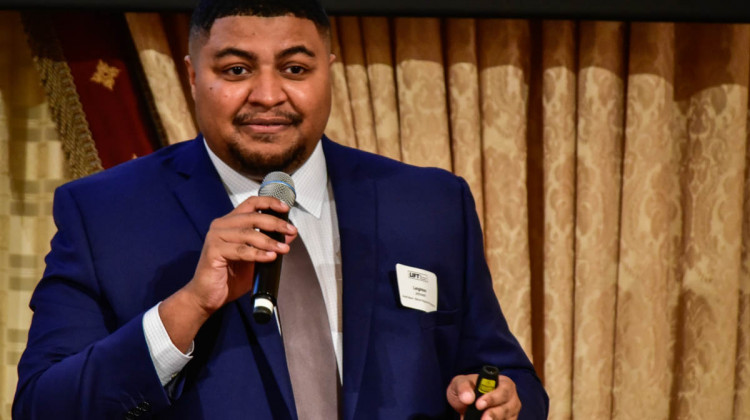