A team from the National Transportation Safety Board is en route to Rochester to investigate a crash that killed three siblings and injured another boy as they were boarding their school bus.

The children were crossing from a mobile home park to board their Tippecanoe Valley school bus on Tuesday morning when a pickup truck hit them.

Twin 6-year-old boys, Xzavier and Mason Ingle, and their 9-year-old sister, Alivia Stahl were killed at the scene. Eleven-year-old Maverik Lowe was airlifted to Parkview Hospital in Fort Wayne for treatment.

The truck’s driver, 24-year-old Alyssa Shepherd was arrested and charged with reckless homicide and passing a school bus with its stop arm extended. She’s out of jail on bond.

A spokesperson for the NTSB says it’s investigating the crash as an isolated incident and looking into the safety of children getting on and off buses. The team will meet with State Police Wednesday afternoon. 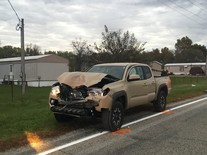 Tags:school busesPublic SafetyNational Transportation Safety BoardFulton County
At WFYI, our goal is to cover stories that matter to you. Our reporting is rooted in facts. It considers all perspectives and is available to everyone. We don't have paywalls, but we do need support. So if unbiased, trusted journalism is important to you, please join us. Donate now.

A former Purdue University professor and his wife have been sentenced to probation and ordered to pay a combined $1.6 million in restitution after pleading guilty to using more that $1 million in federal research funds for their own personal expenses.
Read More

The American Civil Liberties Union of Indiana is suing officials at a northern Indiana school, alleging that they violated a Black student's constitutional rights by sending him home for wearing a T-shirt emblazoned with the text, "I hope I dont get killed for being Black today."
Read More

A voluntary survey from the Indiana Department of Education in 2018 shows more than 3,000 vehicles illegally passed stopped school buses in just one day.