Obama To Campaign For Donnelly In Gary

Indiana’s critical U.S. Senate race will draw two presidents to the state within the coming days.

Tags:Barack ObamaJoe Donnellyelection 2018
Support independent journalism today. You rely on WFYI to stay informed, and we depend on you to make our work possible. Donate to power our nonprofit reporting today. Give now. 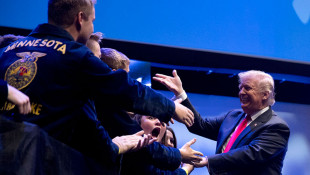