Total Indiana tax revenues have lagged in each of the four months of the fiscal year that began in July. And October didn’t help, with collections missing the mark by nearly $30 million.

That’s despite sales and individual income taxes which exceeded expectations for the first time this fiscal year – though just barely. And despite that positive month, collections for those two tax categories remain less than expected overall.

Corporate tax collections dragged down October numbers the most. For the second time this fiscal year, the state paid out more in corporate tax refunds than it collected.

Tags:revenue reporttax revenue
At WFYI, our goal is to cover stories that matter to you. Our reporting is rooted in facts. It considers all perspectives and is available to everyone. We don't have paywalls, but we do need support. So if unbiased, trusted journalism is important to you, please join us. Donate now. 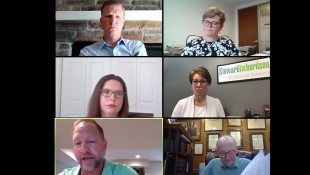 Indiana law allows Hoosiers to vote absentee by mail for 11 reasons, including if they're 65 or older or if they'll be absent from their county the entire time polls are open on Election Day.
Read More

Growing Central Indiana Will Need More Water In The Future

The central Indiana region will need to withdraw almost 30 percent more water 50 years from now than it does today, according to a report from the Indiana Finance Authority.
Read More