The Bostock sisters are a lively bunch.

They are Angi, Crystal and Melissa. On a beautiful spring day, they sit out in the sun talking about their dad, Norbert, or “Nobby,” to those who knew him.

“He was just incredible. Just always there to help somebody else,” says Angi, one of Nobby’s five children. “Always wanted to make people laugh, always had a smile on his face.”

Next to them on a patio table are pictures of Nobby, along with some of his old belongings -- like his badges and work uniforms.

In March of 2020, Nobby became the first known case of COVID-19 in Southern Indiana. After four weeks in the hospital, he died from the disease. He was 77.

“The last time I saw him, he was in an ICU sitting on his bed, and he looked at me through the glass,” Melissa says. “He smiled and waved and gave me a thumbs up.”

A year later, they’re planning a more formal goodbye -- a memorial service in Clarksville to honor the long-time police officer and local politician.

Floyd County sits in the hills of southern Indiana, along the Ohio River. Though it’s near Louisville, it has a small-town feel. Some families trace their roots back several generations — the Bostocks are one of them. 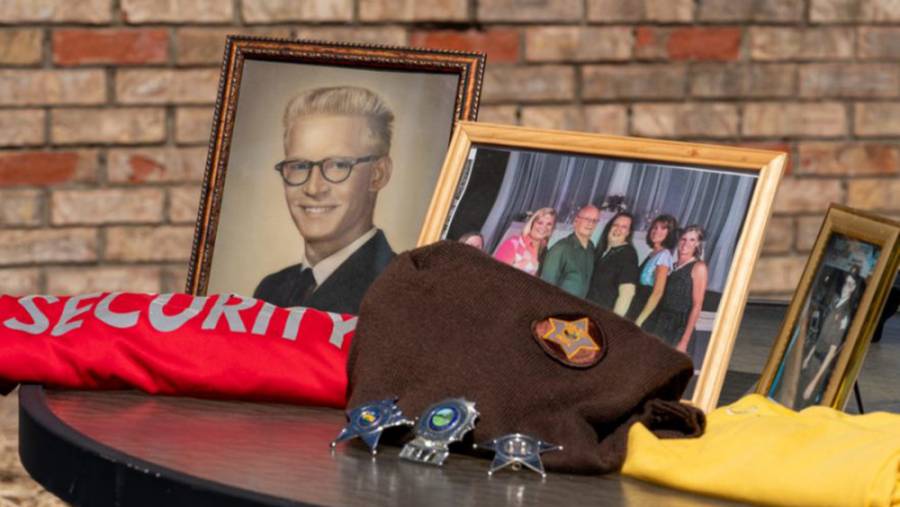 Crystal says a trip to the grocery store with Nobby could turn into an all-day ordeal because of the many friends he’d run into. “Like, if they needed a shirt, he would take the shirt off his back and literally give it to you, and then go home and get a new one.”

Put simply, Nobby’s family says he touched thousands of lives. But the family didn’t feel comfortable bringing so many people together early in the pandemic.

That’s why they’re just now planning his memorial service. And why they want it to reflect the way he lived.

Angi says even when he was in the ICU, the family did all they could to lift his spirits. “I made sure that every nurse that I talked to, I was like, ‘Please make him laugh. Joke with him. That's what he’d want. Even if it's the corniest joke or whatever, joke with him, that's how he is.’"

Melissa says Nobby’s symptoms started with neck pain. Within days, he developed pneumonia and he was admitted to the hospital.

The county health department made the COVID-19 diagnosis public on March 15th. It didn’t reveal Nobby’s name., but it listed several recent high school sports events he had attended to watch family members.

Angi says that was heart-breaking. “If they only knew who it was, they would understand that he would never knowingly go somewhere sick. Ever.”

Once Nobby’s identity was made public, those comments stopped, Melissa says. “It was, ‘Oh, I’m sorry that I said this. I didn’t know it was him. Oh my gosh. My prayers.’”

But Nobby was much more than a statistic. His daughters say he was a loving family man. He was funny and had a lot of heart.

They want his public visitation to honor his spirit. It will be held later this month at the Tri-County Shrine Club in Clarksville, where he worked security on bingo nights.

Melissa says her dad wouldn’t want a somber event. Instead, it’ll be a celebration.

“He didn’t want no visitation,” she says. “He didn't want nothing, except a party.”

The music will include a favorite song of his, one that’s perfect for a party: Toby Keith’s “Red Solo Cup.”

Tags:coronavirusCOVID-19Floyd County
Support independent journalism today. You rely on WFYI to stay informed, and we depend on you to make our work possible. Donate to power our nonprofit reporting today. Give now.

Gov. Eric Holcomb opted not to reimpose any COVID-19 restrictions Thursday as he extended the state's public health emergency for another month.
Read More

The annual report from the state health department shows that the number of abortions in Indiana grew by 119, or 1.6 percent, to 7,756 during 2020.
Read More

Indiana's COVID-19 positivity rate was reported at its lowest level since the pandemic began just over a week ago. Since then, the rate has jumped 52 percent.
Read More