INDIANAPOLIS -- Gov. Mike Pence Tuesday reiterated the defense of his decision to suspend Indiana’s refugee resettlement program for those fleeing Syria and, now, Iraq.  But, it’s unclear how much impact Pence’s policy can have.

Pence’s comments came in the wake of Indianapolis Archbishop Joseph Tobin’s announcement that Catholic Charities brought in a Syrian family to the Hoosier State.  The governor says he respectfully disagrees with that decision, while adding that his heart goes out to the refugees.

“In the wake of a recognition now by the chairman of the Homeland Security Committee that ISIS terrorists have attempted to infiltrate the Syrian refugee program, I think common sense says that we ought to put security first,” Pence said.

He says if the Syrian refugees apply for public benefits to which they’re entitled – such as Medicaid and food stamps – the state won’t block them from receiving those benefits.

“I have no intention of interfering with the ordinary administration of state government relative to people that are legally within the state of Indiana,” Pence said. 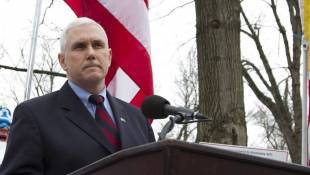 The Roman Catholic Archdiocese of Indianapolis has resettled a family of Syrian refugees in Indianapolis despite objections raised by Republican Governor Mike Pence and actions taken by the Governor to prevent refugees from the war-torn country from arriving in the state.