Around 200 people gathered in an old gymnasium in Jeffersonville for the rally – part of the Indiana GOP’s “Proven Leadership” tour.

Attorney General candidate Curtis Hill told the crowd that courageous leadership is needed to turn the state around, and 9th Congressional District candidate Trey Hollingsworth committed to supporting Donald Trump in his bid to “re-energize” the economy.

“We simply can’t afford to go back to those days of debt and destruction,” Holcomb says.

Pence, who interwove mentions of Hollingsworth, Republican Senate candidate Todd Young and Holcomb into his standard campaign speech, kept that theme of progress.

“Eric Holcomb will be ready on day one to lead Indiana to an even brighter future,” Pence says.

Pence also had sharp words for Holcomb’s opponent John Gregg. Pence cited the Indianapolis Star’s endorsement of Gregg, which said he was “ready to lead.”

“I expect he is ready to lead – ready to lead Indiana right back into the ditch that we found the last time he and his folks were in charge,” Pence says.

Pence ended his speech with a call to vote and to pray.

Tags:Election 2016Mike PenceEric HolcombCurtis Hill
Support independent journalism today. You rely on WFYI to stay informed, and we depend on you to make our work possible. Donate to power our nonprofit reporting today. Give now. 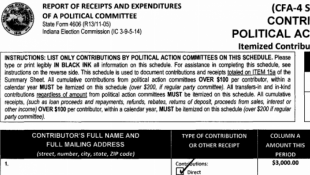