Mike Pence took the stage at the Republican National Convention Wednesday to make his case for the Trump-Pence ticket. Pence, officially nominated as the GOP Vice Presidential candidate Tuesday, accepted the nomination and says Donald Trump will bring strong leadership to the White House.

“Under Donald Trump, our deals will be smarter. Our soldiers will have what they need and our veterans will have what they earned. We will secure our borders, protect our nation – in all this, we will be more serious and when we do, this nation will start winning again,” Pence said.

He also went on the offensive against Democratic candidate Hillary Clinton.

“Democrats are about to anoint someone who represents everything this country is tired of," Pence said. "You know, Hillary Clinton wants a better title and I would too if I was already America’s secretary of the status quo.”

Pence touted the tax cuts he made as governor as he made his case for Republican leadership.

“While the nation suffers under the weight of $19 trillion in a national debt, we in Indiana have a two billion dollar surplus, the highest credit rating in the nation even though we’ve cut taxes every year since I became governor.”

Early in his speech, Pence added a little self-deprecation.

“You know, he’s a man known for a large personality, a colorful style and lots of charisma…so I guess he was just looking for some balance on the ticket.”

And Pence, who introduced himself as “a Christian, a conservative and a Republican – in that order” touched on his faith.

“I believe that we have come to another rendezvous with destiny and I have faith – faith in the boundless capacity of the American people and faith that God can still heal our land,” he said.

Much of Pence’s speech echoed his comments when Trump officially announced him as the vice presidential candidate last Saturday.

Tags:Election 2016Mike PenceDonald TrumpRepublican National Convention
Support independent journalism today. You rely on WFYI to stay informed, and we depend on you to make our work possible. Donate to power our nonprofit reporting today. Give now. 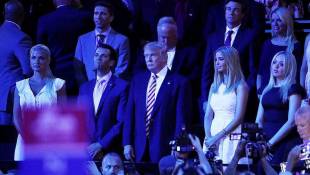 The high stakes of the Donald Trump-Ted Cruz brinkmanship brought to the flashpoint all the anger and tension pent up in the GOP convention over three days - and in the party over several decades.