Pence said in prepared remarks for Tuesday evening's State of the State speech that constitutional rights to religious freedom in worship, service or work are "too precious."

"Our constitution not only protects the 'right to worship Almighty God...according to the dictates of (our) own consciences,' but it also provides that 'No law shall, in any case whatever, control the free exercise and enjoyment of religious opinions, nor interfere with the rights of conscience,'" Pence said.

Read the full text of Gov. Mike Pence's State of the State Address

LGBT rights advocates were disappointed with Pence's remarks. Freedom Indiana, a statewide grassroots organization, issued a statement following the State of the State Address saying it was "disappointed in [Pence's] lack of leadership" on the issue.

"This is a complete letdown. In his speech tonight, after 10 months of allegedly listening to Hoosiers, Governor Pence chose to punt the critical issue of civil rights protections for gay and transgender people to Indiana lawmakers," the statement read.

Bills are pending in the Legislature to extend LGBT protections, and Pence has previously avoided taking a position on the issue. He didn't say in the prepared remarks whether he believed those bills would infringe on religious freedoms.

Tags:Mike PenceFreedom IndianaState of the State AddressLGBT rights
Support independent journalism today. You rely on WFYI to stay informed, and we depend on you to make our work possible. Donate to power our nonprofit reporting today. Give now. 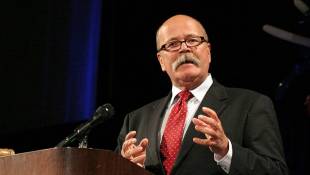 Even while Gov. Mike Pence was still hours away from delivering his fourth State of the State address, the campaign for his Democratic rival John Gregg was attacking.