Pew Research: Latinos Are Paying More Attention To This Election Than Previous Years 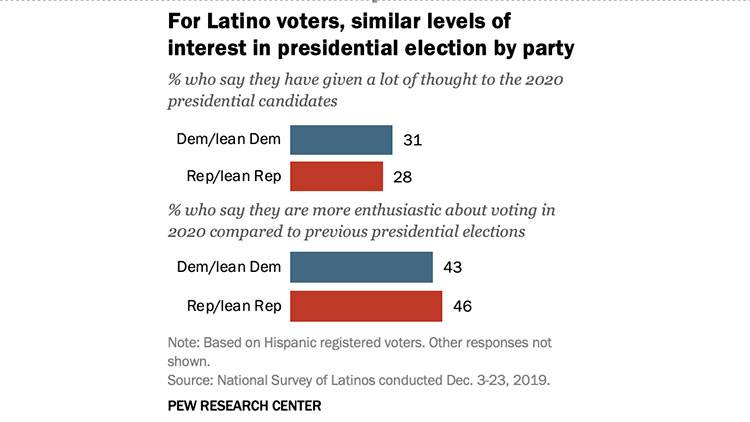 About 3-in-10 Latino voters – both Democrats and Republicans – say they have given a lot of thought to who is running for president in 2020, a new survey shows.

The Pew Research report finds almost half say they are more enthusiastic about voting this year than in previous presidential elections.

“So, in many respects, many Latinos have grown concerned about the situation of their group within the U.S. Most Hispanics also tell us that it matters who wins the election this year,” says Mark Hugo Lopez,  director of global migration and demography Research at Pew Research Center.

Hugo Lopez says the Latino and immigrant population is growing in Indiana and some of their top policy priorities include health care and a path to legal status for unauthorized immigrants.

Nationally, Hispanic voters saw a 50 percent increase with 29 million Latinos eligible to vote in 2018 and are expected for the first time to be the nation’s largest racial or ethnic minority in a U.S. presidential election.

Tags:2020 election
At WFYI, our goal is to cover stories that matter to you. Our reporting is rooted in facts. It considers all perspectives and is available to everyone. We don't have paywalls, but we do need support. So if unbiased, trusted journalism is important to you, please join us. Donate now.