Fishers police Sgt. Tom Weger tells The Indianapolis Star that officers were pursuing the motorist early Wednesday when the man stopped his vehicle and ran into a neighborhood just north of Indianapolis.

Officer Jarred Koopman and the 5-year-old Belgian Malinois, named Harlej, pursued the driver on foot. Koopman let the dog run ahead when the suspect disappeared into the woods.

Weger says Koopman heard what he believed was a gunshot moments later.

Officers arrested the man, who had a leg injury believed inflicted by the dog. Harlej was found dead nearby. Weger says Harlej likely died of a gunshot wound.

Police arrested a woman who was also in the vehicle.

Tags:Fisherspolice dogFishers Police Department
At WFYI, our goal is to cover stories that matter to you. Our reporting is rooted in facts. It considers all perspectives and is available to everyone. We don't have paywalls, but we do need support. So if unbiased, trusted journalism is important to you, please join us. Donate now. 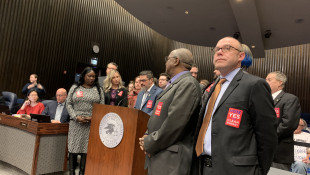