Professor: Many Of Indiana's Bats Are 'Dropping Like Flies'

Professor: Many Of Indiana's Bats Are 'Dropping Like Flies'A longtime bat researcher has noticed that some species have become hard or impossible to find. The primary cause is white-nose syndrome, an exotic infectious disease associated with a fungus introduced to the Albany, N.Y., area from Europe in 2006. It has spread west ever since, killing bats by the millions.urlbats, Audubon Society, Ball State University2020-01-27T00:00:00-05:002020-01-27T00:00:00-05:00 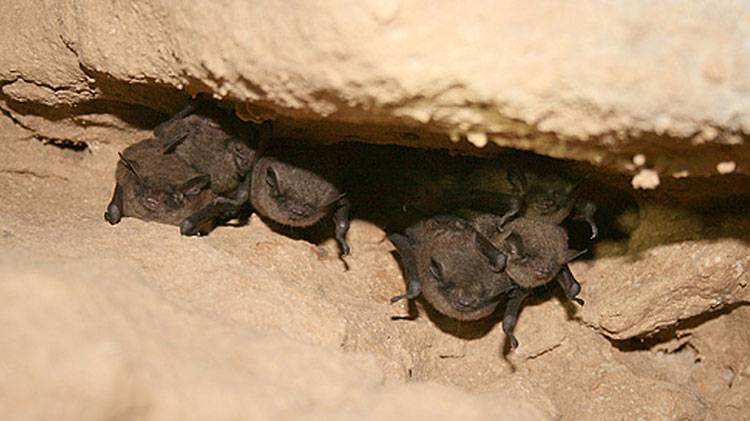 MUNCIE, Ind. (AP) — Many of Indiana's bats are disappearing at an alarming rate, but if you’re hoping that means a bat is less likely to sneak into your attic or church, you’re out of luck.

A recent bat talk by Ball State University biologist Tim Carter to local Audubon Society members was humorous and entertaining before turning bloody and fatal — a fact of life for bats.

There are more than 1,400 species of bats in the world, including 45 in the U.S. and 13 in Indiana, a handful of which are commonly encountered in central Indiana.

A longtime bat researcher who displays affection and admiration for the creatures, Carter has noticed that some species have become hard or impossible to find.

The primary cause is white-nose syndrome (WNS), an exotic infectious disease associated with a fungus introduced to the Albany, N.Y., area from Europe in 2006. It has spread west ever since, killing bats by the millions.

The tricolored bat, which is the professor's favorite, has never been super common in Indiana, but he used to be able to catch one per night — or if not one each night maybe two the next night.

"I haven't seen one in five years," he said. 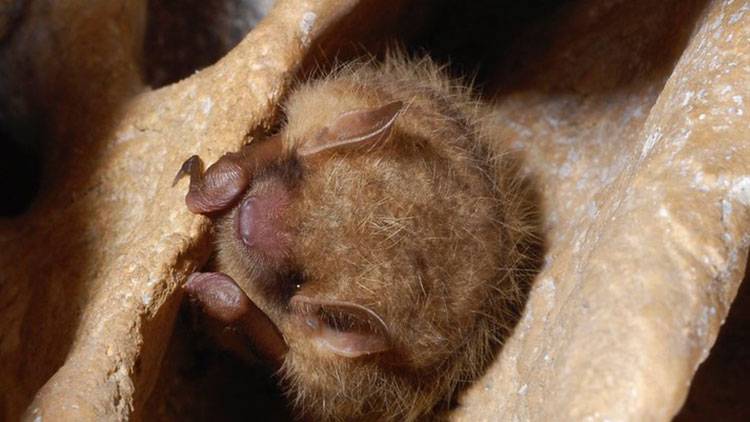 In this 2016 photo, a healthy tri-colored bat hibernates on the wall of the Black Diamond Tunnel in the North Georgia mountains. (Pete Pattavina/USFWS)

And he used to catch long-eared bats all the time. "If we caught 300 bats in a summer, 150 would be long-ears," Carter said. "With two to three times the effort, we might catch five, so the decline is very real … It's not just on paper. In the wild, we just don't see these. They really are getting wiped out. It's pretty scary stuff."

WNS is decimating cave bats that primarily hibernate in caves, mines or tunnels during the winter. The disease was possibly transmitted to North America on the clothing of a cave explorer from Europe.

The fungus attacks the bare skin of bats while they are hibernating. As it grows, the fungus causes changes in bats that make them more active than usual and burn up fat they need to survive winter, according to the WNS Response Team, a group of biologists, researchers, land managers and bat lovers.

During hibernation, bats turn off their internal furnace, dropping their body temperature from about 100 degrees to around 40 degrees, the same temperature as a cave, Carter explained. Their heart rate slows to below 20 beats per minute; they take only a handful of breaths per minute. They basically spend their winters in refrigeration or a state of suspended animation.

When they do wake up, they start shivering, and it can take them up to 30 minutes to come out of hibernation. They respond in slow motion if a predator comes along. Which is why they hide out in dark caves, up in a corner where nothing can find them.

"They do occasionally arouse (naturally) and use up some fat reserves, but if we come in and bother them … with flashlights … 'Look, bats, they're cool,' they heard you, right, they just can't do anything about it," Carter said. "So they start that process of arousing, "Ooh, we should be quiet and leave them alone;' and we leave, and the damage is already done … About 30 minutes later … they start flying around, 'Where are all those people? Did you hear them? … then go back into hibernation, they just used 30 days worth of fat reserves."

If they use up all the fat reserves they had stored up for winter and it's only February, and "they eat insects for a living, they're done," Carter said. 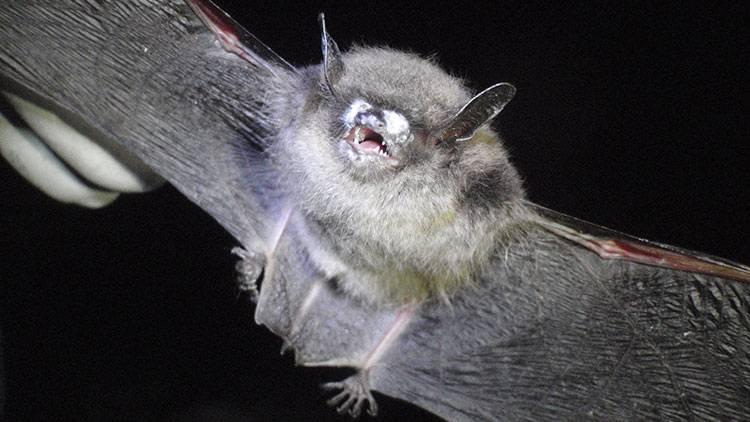 This little brown bat shows the classic symptom of white-nose syndrome - the white tufts of fungal growth on its muzzle. (Gabrielle Graeter/NCWRC)

WNS doesn't affect migratory bats like the Eastern red bat that is found in Indiana.

Unfortunately, migratory bats are being killed by what Carter calls "wildlife in a blender," or wind turbines. "People call this green energy," he said recently to a crowd of bird lovers at Kennedy Library. "I call it red energy. I call them all kinds of terrible things."

Not meaning to downplay the threat of wind farms to birds, but bird mortality at a wind farm is measured in dozens or hundreds, Carter said, while bat fatalities are measured in the thousands.

The 150-foot-long blade of a wind turbine might not look like it's moving fast, but on a windy day, it can complete one revolution in four seconds, which equates to the tip of the blade traveling more than 200 mph.

"Certainly bats are not expecting that," said Carter, who sometimes thinks and talks like he's a bat: “Hey, look at that really cool, tall thing out there. I'm going to go check it out. Hey look, it's spinning. That's really neat.' They go check it out, and bam.”

Carter is researching ways to help conserve the bat population, he says, because they are an important part of the ecosystem, consuming vast amounts of insects, serving as pollinators in many areas, and distributing seeds in many areas, including rain forests.

In addition, they are biological indicators and make up nearly one-fourth of all mammals.

"Like it or not, we are part of the ecosystem," Carter told The Star Press. "You can think of the ecosystem like a car. There are lots of parts and certainly some are more important than others. But we all know if you have enough parts on your car break, the car stops working and you are stranded.

"Species are the parts of the ecosystem. If we lose one or two we will likely be fine, but if we lose enough the ecosystem will struggle and eventually stop. That ecosystem is what makes the air we breathe, the water we drink and the food we eat. We need a healthy ecosystem for our existence."

The good news, or bad news if you don't like bats, is that Indiana's big brown bat, which Carter describes as a super bat or "the cockroach of the bat world," is not as vulnerable to WNS, experiencing only a 15 percent to 20 percent population decline, "which they can out-breed."

"So we don't have any problem with big browns; they'll be here for a while," Carter said.

Big brown bats are by far the most common bat in Indiana.

When a bat gets into your house in Indiana, it's almost certainly a big brown. 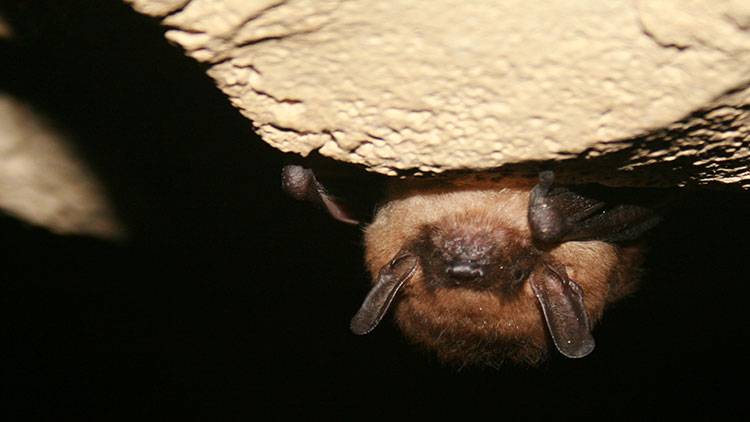 If anyone comes into direct contact with a bat, or if you suspect they might have come into contact, like a child sleeping in the same room, the bat should be captured by whatever means necessary and turned over to the health department for rabies testing, even though the chance that a wild bat has rabies is remarkably low, according to Bat Conservation International.

If no one has come into contact with the bat and the weather will be above 50 degrees for the next 24 hours, you should work to get the bat outside, Carter says. If the bat is flying around, you should open windows and doors to the outside and most often the bat will quickly find its way out.

If the bat is stationary or can’t find its way out, then you need to capture and release it by whatever method you can without touching it, Carter went on. You can place a small trash can or box over the bat (on the wall or other flat surface) and use a piece of cardboard to slide between the can and the wall to trap the bat inside. Then take it outside and release. If you have to grab the bat use thick gloves. And remember to sanitize anything that comes into contact with the bat with a little Lysol or other disinfectant.

If the temperatures are below 50 degrees, releasing a bat outside is a slow and painful death.

While bats are mammals, they're not, contrary to popular opinion, flying rodents. For example, Carter said, if you leave two mice alone for six months, when you come back you don't want to know how many mice you have. Leave two bats alone and, if you come back in a year, you're lucky to have three bats. It's one pup once a year for bats.

Bats have a skeleton or floor plan remarkably similar to ours, such as a thumb with two knuckles and four fingers with three knuckles, although the bat's hand includes a wing membrane that allows it to fly, Carter went on. A bat can curl and rotate its fingers and wrist to make itself exceptionally maneuverable in the air.

Explaining their appearance, Carter said bats are designed for sound, not to be pretty. That's why they have big ears. They use sonar (echolocation) to navigate.

He would argue that every one of us has walked under a red bat. In the summer, if you go anywhere near a tree, there will be red bats hanging from the tree, looking like dead leaves. Their camoflauge is amazing.

Carter has spent hours fruitlessly looking for a red bat in a tree, which he knows is in the tree because of a radio tracker.

Carter told the Audubon Society members bats are one of the last frontiers.

"I mean, there's still a lot to learn with birds … but you guys got a way earlier start," he said, "and we know a ton about birds … But bats, they're small, they fly fast, and they do it at night, so they're really hard to work with …

“ … even our Indiana bats, federally endangered, we know the most about it. We know that it spends its summer here, we know that it spends its winter here, but we have no idea how they get from point A to point B … We don't know how these animals migrate … so it's really difficult to conserve these resources when you don't know about them and they're all declining for various reasons. So it's a pretty tricky time for bats right now.”

Tags:batsAudubon SocietyBall State University
At WFYI, our goal is to cover stories that matter to you. Our reporting is rooted in facts. It considers all perspectives and is available to everyone. We don't have paywalls, but we do need support. So if unbiased, trusted journalism is important to you, please join us. Donate now.

The Environmental Protection Agency has finalized its plan for the area where the West Calumet Public Housing Complex once stood in the USS Lead Superfund site.
Read More