Purdue University cut the ribbon Monday on a $15 million plant research center that's the first of its kind in North America.

Researchers at the new Indiana Corn and Soybean Innovation Center will study the growing habits of cash crops at the school's 1,400-acre research farm.

The process is called phenotyping -- studying the visible traits of the plants, down to their genes. Purdue is also building a controlled environment phenotyping lab as a counterpart to the field facility. Scientists there will be able to alter the growing conditions of individual plants.

The new Innovation Center was named for a $4 million contribution from the state's corn and soybean trade groups. Evansville farmer Joe Steinkamp helps lead the soybean group, and also serves as vice president of the American Soybean Association.

He says the center will facilitate research that farmers can't do on their own, and which will improve their profit margins and crop yields.

"The phenotyping center can ask the plant questions as it's going through the season by looking at it and detecting things," Steinkamp says. "Then, when we know what the plant wants, we can give it to them."

Agronomy department senior Eli Hugghis says their goal at both facilities is to figure out how to feed an increasing population with crops that can withstand more extreme conditions, provide better nutrition and resist disease.

"We obviously are going to have to grow more food, but also do it sustainably and feasibly," Hugghis says, "so that we're not just growing more food for that one generation, but we're growing it for generations to come."

The new center will also use and study drone and sensor technology to analyze field conditions.

Purdue president Mitch Daniels says young scientists at the center, such as Hugghis, have a dual responsibility: studying new biotechnologies to help feed a growing population, and convincing the public that they're safe.

"Great science alone won't feed 9 billion people [Earth's projected population by 2050], if we deny ourselves the benefits of that science through superstition or anti-scientific, sometimes self-interested misinformation," Daniels told attendees at the center's dedication.

The center is located at Purdue's Agronomy Center for Research Education, or ACRE Farm, in West Lafayette. It'll be home to several agriculture-related departments and projects that were previously scattered around campus.

Tags:Purdue UniversitycornMitch Danielssoybeansphenotypingcrop yieldsplant scienceAgriculture
Support independent journalism today. You rely on WFYI to stay informed, and we depend on you to make our work possible. Donate to power our nonprofit reporting today. Give now. 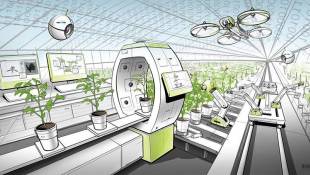 Funding for the new 7,300-square-foot facility will come from the university's capital funds. Construction is tentatively set to begin in February, with completion expected by January 2018.