Purdue-Zoo Partnership Aims To Save The Hellbender

North America’s largest salamander is disappearing, but Purdue scientists are trying to save it from extinction.

The university is spearheading a conservation effort which involves raising the amphibians in captivity for a few years before releasing them into their natural habitat.

In 2013, a team from the university’s Aquaculture Research Lab collected hellbender eggs from the Blue River in southern Indiana -- currently the only location in the state where the salamander is found.

At Lafayette’s Columbian Park Zoo, zookeeper Noah Shields is now helping take care of three of the amphibians that were hatched from those eggs. The one-year-old  hellbenders are mostly brown in color, with a flat body and head. They are currently less than a foot in length, but can grow to be as long as two-and-a-half feet from snout to tail.

“We’ll raise them until they’re a little bit bigger, start training them up with some rocks and some gravel and some things like that, kind of give them a hellbender boot camp, before we release them back into the wild," says Shields. "And they will actually go back into the river system.”

Shields says the zoo and its staff had to go through some training to be ready to take the hellbenders, including designing an entirely new system of tanks and chillers.

“They’re a very unique animal species in their husbandry aspects and their care aspects," he says. "They’re not just something you can put in a tank and not have to worry about. We do water quality testing on multiple different water quality parameters daily. We also do water changing, the temperature has to be correct.”

Shields says there’s always the chance that animals raised in captivity won’t survive when returned to their natural habitat.  But he says the area the hellbenders will be living in is one of the last places that can support the species.

“I think the hopes for this project, and the hopes for any conservation project like this when you’re reintroducing animals back into the wild, is not just to do it in one site," says Shields. "It’s to make your system unique and functioning so you can do this and then clean up other sites to release them back into their natural historical range.”

“It comes back to the whole thing of not having all your eggs in one basket," he says. "Especially when you’re dealing with a critically endangered species, lots of zoos, aquariums, other nature centers and wildlife parks like that, we spread our animals around. Just in case there is a disease that comes through in your area it’s not going to wipe out the entire population of one species.”

He says it’s just as important to save animals like the hellbender as it is more well-known endangered species such as the Black Rhino or the Mountain Gorilla.

“A lot of people really aren’t super enthusiastic when they see a slimy salamander or a bumpy toad," says Shields. "However, they’re a huge indicator species for the environment around them and they tell us a lot about what’s going on in the wild.”

Georgia Parham is a public affairs specialist for the U.S. Fish and Wildlife Service. She says it can be difficult to convince the public of the need to protect some animals from extinction. But she says saving all animals—regardless of their cuteness factor—is important because they’re all part of the ecosystems we depend on as humans.

Parham says the reasons animals are endangered varies from species to species, but it almost always can be traced back in some way to human activity.

“You look at the bald eagle and the use of DDT for example," says Parham. "That was a very clear connection. But sometimes things aren’t as clear. But if you look at the threats facing the majority of the species that are on the endangered species list it’s things like habitat loss or overuse or other factors that human activity has contributed to.”

Parham says because humans are responsible for some of the environmental changes leading to the decline of other species, humans can also make changes to help these animals survive. 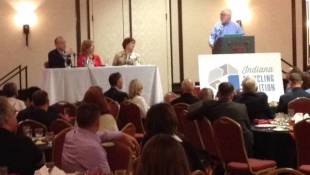 Indianapolis is set to get a new recycling center that would separate recyclables from trash and that worries some in the reuse business.