Race For U.S. Senate Seat Is Rematch Between Todd Young And Baron Hill

A big part of Todd Young’s pitch to voters in the primary was his record against Baron Hill. Young beat the then-incumbent representative in the 9th congressional district race in 2010.  And Young spent a significant part of his victory speech Tuesday night focused on attacking the Democrat’s record.  But Hill says 2010’s result has little bearing on 2016.

“I think the voters could care less that we ran against each other in 2010," HIll said. "They want to know what we stand for.  And the facts are, I’m going to stand up for the middle class.”

Hill believes Donald Trump’s likely presence at the top of the GOP ticket this fall will likely have a big impact on down-ticket races.  Young, though, brushes that issue aside.

“I’m duty-bound to focus on this United States Senate race, so that’s what I’m intent to do," Young said. "I’m going to bring together Republicans from every stripe, as I’ve done since I first ran for office.”

Young and Hill are vying to replace U.S. Senator Dan Coats, who is retiring.

Tags:Election 2016Todd YoungU.S. SenateBaron Hill
Support independent journalism today. You rely on WFYI to stay informed, and we depend on you to make our work possible. Donate to power our nonprofit reporting today. Give now. 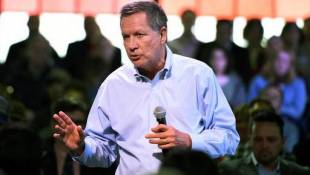 The Ohio governor is suspending his presidential campaign, leaving Donald Trump as the last man standing. Kasich won one state, his home state of Ohio and trails far behind in the delegate count.