Relief And Re-evaluation: How The Latest Round Of School Referenda Played Out

Six out of the 10 school funding referenda measures across the state won approval from local voters, with two out of the four school districts asking for additional funding from their communities for the first time passing.

“And it was a good win for all of Franklin, for our teachers, our support staff and for students,” he says.

River Forest Community School Corporation, just outside of Gary, won a referendum for a property tax rate of more than $1 per $100 of assessed property value.

Superintendent Steve Disney says the referendum win is a huge relief. He says his district is expected to lose about $600,000 due to property tax caps going into effect next year, and the measure will help cover his district’s transportation budget. He says the community’s support offers a sense of optimism for the district.

“A lot of relief, a lot of knowing that we can get back to business and focused on the future for kids,” he says.

A measure in Porter County for Duneland School Corporation also passed, which will help maintain programming for career and technical education, and help support STEM programs and teacher training.

MSD Wayne and Decatur Townships both sought new referenda before previous levies expire, and both passed.

Like most Marion County schools, Wayne and Decatur Townships face funding decreases due to how the state calculates funding based on students living in poverty. Since 2014, Wayne Township received $9.8 million fewer in funding. The district has more than 16,000 students. Almost half qualify for free or reduced prices meals.

Wayne Township will receive $80 million over eight years will help make up for unreliable property tax income. The district’s previous referendum, passed in 2015, will also be in effect for four years. During that time, the district will receive about $20 million in combined local property taxes.

Decatur Township will receive $42.4 million over eight years for general operating expenses. Most of which, will go toward covering transportation costs. The referendum will replace and reduce the existing levy, which was supposed to run through 2021.

Tags:School Fundingschool referenda
At WFYI, our goal is to cover stories that matter to you. Our reporting is rooted in facts. It considers all perspectives and is available to everyone. We don't have paywalls, but we do need support. So if unbiased, trusted journalism is important to you, please join us. Donate now.

More than 100,000 children in Indiana don't have a computer or a computer with internet access at home, according to an analysis of federal data. Use this interactive map to see the rate of access in your school district.
Read More 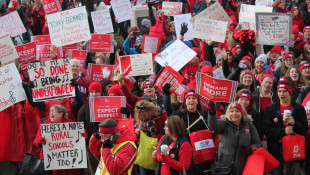 A concern in the coming months is the number of teachers who may retire, whether because of a lack of increasing pay, the pandemic, or both.
Read More