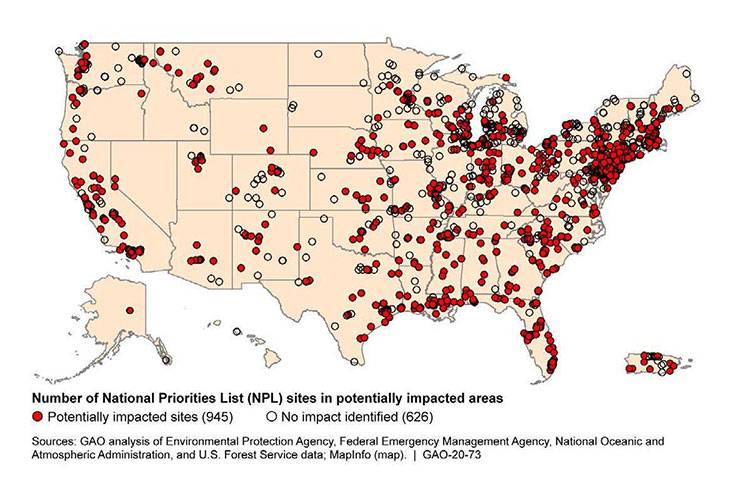 Climate change is expected to mean more flooding in Indiana and that could put the state’s hazardous waste sites — and the people who live near them — at risk. That’s according to a new report on Superfunds from the Government Accountability Office.

The GAO report shows that more than half of all Superfund sites across the country will be put at risk due to climate change — from sea level rise, storm surges, wildfires, and flooding. You can see the ones in Indiana through this interactive map.

Alfredo Gomez directs the agency’s natural resources and environment team. He says flooding at an Indiana Superfund site could shut off the power to equipment that’s treating the hazardous waste or cause it to malfunction. And if the waste is in an open container, like a lagoon.

“If you have really extreme flooding, you could be dispersing those contaminants,” Gomez says.

But some regional branches of the Environmental Protection Agency say they don’t consider climate change when designing remedies or risk assessments for Superfunds. Gomez says EPA headquarters has to give its regions the info and guidance they need to prepare.

“So those are things that we expect EPA to look at and look to see on a site specific level what what needs to be done,” he says.

The GAO also recommends that the EPA add addressing climate change back into its strategic plan — which was taken out by the Trump administration.

Tags:Superfundclimate changeGovernment Accountability Officeflooding
Support independent journalism today. You rely on WFYI to stay informed, and we depend on you to make our work possible. Donate to power our nonprofit reporting today. Give now.