Hoosiers will find a constitutional amendment on the ballot this November for the first time in six years.

Amending Indiana’s constitution is notoriously difficult. This amendment would protect a citizen’s right to hunt and fish, but it has some people wondering what it will actually do.

The path to getting this amendment on the 2016 ballot began back in 2014. Amending Indiana’s constitution is a lengthy process, says David Ortenlicher, an Indiana University law professor.

“Before something can be added to the constitution, it has to go through three steps,” says Ortenlicher. “First, it has to be passed by a majority of both the house and the senate.”

Then, a newly elected legislature has to pass that bill again. Those elections took place in 2014, too. Finally, it must be passed in the same form, which happened in 2015.

After all that, voters finally get their say on the 2016 ballot.

Ortenlicher says this lengthy process has prevented a few controversial topics from ending up as proposed amendments — like same sex marriage.

“We’ve had a statutory ban on same sex marriage since the 1990s. And then there was a move to put it into the constitution. So, because it had to go through these multiple steps, it never got through,” says Ortenlicher.

The method does seem to vet for winning amendments. Over the last 20 years, Hoosiers have voted on 10 amendments — and all 10 passed, with voter approval of 70, even 80 percent.

But Erin Huang, the director of the Indiana chapter of the Humane Society, hopes this amendment will reverse that trend.

The Humane Society opposes this amendment on principle. Huang says it’s a solution to something that’s not a problem.

“Even though this language may just say, ‘Do you believe people should have the right to hunt,’ just keep in mind that this is a right that people already have, it’s not being taken away from anyone,” Huang says.

Even if this amendment passes, the Humane Society’s ability to lobby for hunting restrictions wouldn’t change. The amendment simply says that the General Assembly is the only group that can change hunting and fishing laws. That’s the way it is now, too.

The Department of Natural Resources manages hunting and fishing in the state. The department can’t take a stand on the issue, but said in a statement that DNR’s “statutory authority to manage fish and wildlife would not be impacted.”

So the amendment isn’t intended to fix a problem — at least a current problem.

But that’s also why supporters say the amendment is necessary — nothing should change.

Republican Rep. Sean Eberhart sponsored the amendment. He declined to be interviewed, but said in a statement that hunting and fishing are “part of our heritage” and that now is the “right time … to make this type of decision.”

So there’s this perception that hunting rights could be limited in the future. Even though nothing is happening on that front right now, Larry Becker doesn’t want to take any chances. He’s a landscape contractor from Fishers and he loves to hunt.

“Boy, I just would hate to have— wake up one day and find out because I didn’t do something or take the right stand that it’s not available to my kids,” Becker says.

Becker is also an NRA member. He says hunting, fishing are important traditions to him.

“When you get down into camp, it has very little to do with killing a deer or catching a fish —that is fun, and it’s a great experience — but time in camp, in fellowship with people, telling stories and reliving the past and planning for the future is — that’s what’s valuable,” Becker says.

Tags:huntingfishingconstitutional amendmentIndiana Constitution
Support independent journalism today. You rely on WFYI to stay informed, and we depend on you to make our work possible. Donate to power our nonprofit reporting today. Give now.

Host John Krull moderates a discussion of the Right to Hunt and Fish amendment on the Indiana ballot. Proponents argue the it will preserve the state's hunting heritage, while opponents argue it is a solution to a problem that doesn't exist. 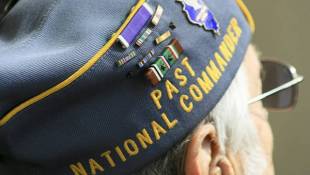 Indiana has the 4th largest National Guard and 16th largest veteran population in the U.S.