Ritz And The Department Of Education Propose New Testing System

State Superintendent Glenda Ritz and the Department of Education issued a proposal for Indiana’s new testing system. The plan is just one design the ISTEP committee could consider sugesting to the 2017 General Assembly next legislative session.

The 2016 General Assembly passed a law getting rid of ISTEP last spring, and it also created the ISTEP committee to recommendation a new plan by Dec. 1. At this point, the panel doesn’t look likely to independently meet this goal.

Without a concrete plan forming in the committee, the DOE is suggesting this one and says it would reduce overall testing by eight hours and save the state around $12 million. Here are some details of their plan:

Some Tests Would Be Eliminated

What Would Be Added?

What Would The Bulk Of Testing In Third Through Eighth Grade Look Like?

The DOE says this proposal took feedback from superintendents, principals and other educators that are part of key stakeholder groups. It may be considered by the ISTEP panel and the legislature as they decide the future of the state’s test.

Tags:Indiana Department of EducationGlenda Ritzstandardized testsISTEPISTEP+ Review Panel
Support independent journalism today. You rely on WFYI to stay informed, and we depend on you to make our work possible. Donate to power our nonprofit reporting today. Give now.

Last year, Purdue University announced Mitch Daniels would be stepping down as president – and that his successor would be Mung Chiang, then-dean of the university’s College of Engineering. 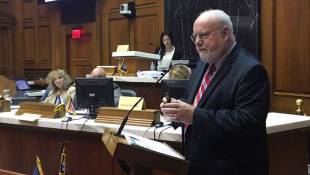 From The Experts: What Should Indiana Do With The ISTEP?

The ISTEP panel that is developing a legislative recommendation for how to replace the state's testing system heard from a slew of national testing experts Tuesday, who make the most specific suggestions to date.