He spanned a range of issues, but focused on trade and Carrier Corporation’s decision to leave Indiana for Mexico.

Sanders listed several reasons why he is different from Hillary Clinton, including campaign finance and the war in Iraq, both of which got big responses from the audience.

“Now there’s another area where Sec. Clinton and I have a very different point of view and that is on trade policy,” he says.

The crowd didn’t seem to know how to respond, so he elaborated.

“Now I know that trade policy is not a sexy issue,” Sanders says.

He said trade policies like NAFTA, the North American Free Trade Agreement, have affected workers throughout the country and in Indiana, including those laid off from Carrier.

Former Pres. Bill Clinton signed NAFTA into law in 1993. Clinton held a rally in Fort Wayne on Saturday on behalf of his wife, and said NAFTA wasn’t the reason Carrier decided to leave.

“Well if you’re concerned about manufacturing, don’t support trade policies that will cost us millions of jobs,” Sanders says.

He also criticized Hillary Clinton for not going far enough in her promise to raise the minimum wage. Sanders emphasized that he would want to bring the federal minimum wage to $15 per hour. Clinton supports raising it to $12 per hour.

Tags:Election 2016Fort WayneBernie Sanders
At WFYI, our goal is to cover stories that matter to you. Our reporting is rooted in facts. It considers all perspectives and is available to everyone. We don't have paywalls, but we do need support. So if unbiased, trusted journalism is important to you, please join us. Donate now. 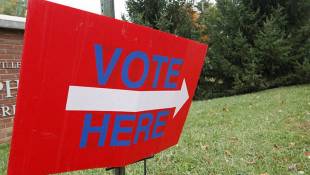 4 Things To Watch In The Indiana Primary

How much will Donald Trump pad his lead, and what will Ted Cruz do next? Even if Bernie Sanders wins, Hillary Clinton's lead is virtually insurmountable. And the GOP Senate primary is one to watch.
Read More
Follow Us On Twitter