School To Start After Chemical Testing At Franklin Elementary Schools

Franklin Community Schools says kids can return to Needham and Webb elementary schools on Aug. 8, the end of summer break. A company tested the properties for cancer-causing chemicals that some think could be contributing to high child cancer rates in the area.

Air and soil gas were tested outside the schools that sit close to the old Amphenol industrial site. The ambient air samples didn't detect anything significant. The cancer-causing chemical PCE (tetrachloroethylene) was in half of the soil gas samples and TCE (trichloroethylene) was in one of them. But the school corporation says none of the samples were above the Environmental Protection Agency’s protective levels for health.

“All indications we have to this point are that our staff and students are safe and have been safe and we’re looking forward to starting school on Wednesday," says Jeff Sewell, director of operations for Franklin Community Schools.

Before coming to work for the school corporation, Sewell worked for the Indiana Department of Environmental Management for more than 20 years.

Belinda Velásquez’s 14-year-old daughter Athena was diagnosed with leukemia two years ago and is now in remission. She has another daughter who still attends Needham Elementary. 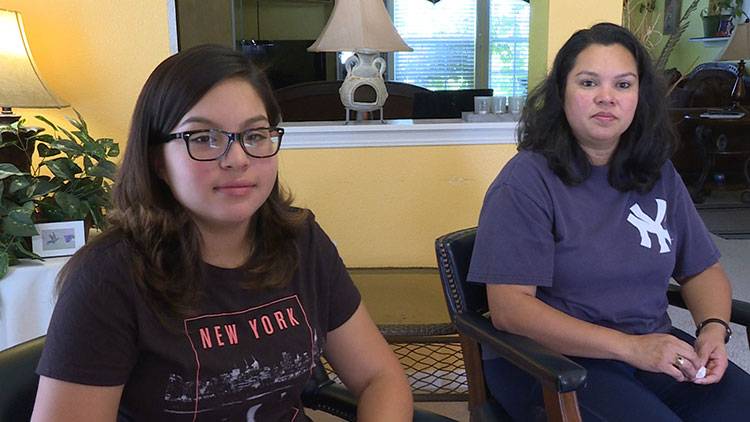 Athena (left) and Belinda Velásquez (right) at their home in Franklin. Athena, 14, was diagnosed with leukemia two years ago and is now in remission. (Rebecca Thiele/IPB News)

Velásquez says she wouldn't pull her daugher out of the school, but doesn't let her drink the water. The old Amphenol site was contaminated with VOCs or volatile organic compounds — which can be a problem in the air, water, or soil.

Velásquez says she’s glad the schools were tested, but she's still concerned about trace amounts of these cancer-causing chemicals.

“I’m really am happy, but I want them to do something about it because it’s still chemicals coming in,” she says.

High levels of TCE, PCE, and radon were found in a few homes during a round of testing done by the Edison Wetlands Association — 14 homes were tested total.

Tags:Franklin Community SchoolsFranklintrichloroethylene
Support independent journalism today. You rely on WFYI to stay informed, and we depend on you to make our work possible. Donate to power our nonprofit reporting today. Give now.