Indiana State Sen. Luke Kenley (R-Noblesville), one of the most influential lawmakers at the Statehouse, will retire later this year after 25 years in office. His service includes the last nine sessions as the chamber’s budget architect, chairing the Appropriations Committee.

Kenley was re-elected to another four-year term just last November. But he says he told people on the campaign trail he had two final goals: passing another balanced budget and creating a long term road funding plan.

“So I accomplished those objectives and I’ve worked with some people to make transitions in the Appropriations area so … it’s just time to move on,” Kenley says.

“The fact that he’s leaving leaves a large gap in the institutional comprehension of the process and it’ll be difficult for the Senate to fill that,” Ketzenberger says.

Kenley is viewed by many as a moderating force in the conservative Senate GOP caucus. Ketzenberger says Kenley’s retirement could create a more conservative shift in the chamber.

And he says that’s particularly true if Kenley’s replacement as Appropriations Chair is Sen. Brandt Hershman (R-Buck Creek), as many expect.

“But I think also with that position and experience … that it’s hard to be an ideologue in a place like that because you have the most comprehensive view of the state government,” Ketzenberger says.

Kenley says the best advice he can give to his replacement as Appropriations Committee Chair is to listen.

“I mean it would be so much easier just to turn people away. But really I tried to make it a practice to listen to every point of view and I think that really will help you in the long run,” Kenley says.

Praise for the retiring lawmaker came from both sides of the aisle.

Sen. Karen Tallian (D-Portage), Kenley’s Democratic counterpart on the Appropriations Committee, says their relationship is one of mutual respect. She calls his retirement, “a great loss to the Senate and to the State of Indiana as a whole.”

House Speaker Brian Bosma (R-Indianapolis) praises Kenley as a “dedicated public servant, problem solver and budget hawk,” while Senate President Pro Tem David Long (R-Fort Wayne) calls him “one of the most effective and influential public servants of our generation.”

Kenley’s last day will be Sept. 30. Precinct committee members will choose a replacement for his Senate seat.

Tags:Indiana SenateLuke KenleyIndiana legislatureIndiana Senate Republicans
Support independent journalism today. You rely on WFYI to stay informed, and we depend on you to make our work possible. Donate to power our nonprofit reporting today. Give now. 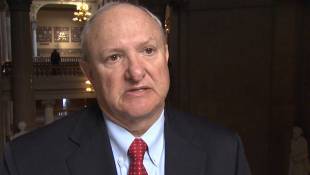 Sen. Luke Kenley (R-Noblesville) will retire in September. He was a leader in crafting budgets.