A Senate panel is grappling with how – and how much – to tax electronic cigarettes.

Health advocates say such a tax is important because of the growing use of e-cigs among young people – a 78 percent increase last year, says American Cancer Society’s Bryan Hannon.

“And I would say that this increase in youth use isn’t necessarily a glitch. I think this is really by design," Hannon says. "These products – especially the bigger products on the market – are owned by tobacco companies and they’re using the same playbook that they used decades ago with cigarettes.”

Hannon wants e-cigarettes taxed based on the price of sale – not based on the e-liquid amount, as the bill currently does. And he says he’d like to see a rate similar to the tax on regular cigarettes.

“Customers just simply cross into the neighboring states to gain access to the products that were either cheaper or available in other states,” Netherton says.

A Senate committee will consider amendments to the bill and vote on it as early as next week.

Tags:2019 legislative sessionE-cigarettes
At WFYI, our goal is to cover stories that matter to you. Our reporting is rooted in facts. It considers all perspectives and is available to everyone. We don't have paywalls, but we do need support. So if unbiased, trusted journalism is important to you, please join us. Donate now. 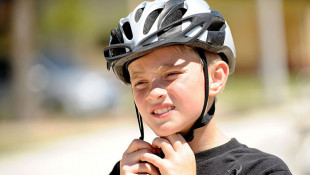 A bill discussed Tuesday by the Indiana House public safety committee would give police officers the option to issue tickets with maximum $25 fines to violators under age 18 or impound the riding device until the child is shown to have a proper helmet.
Read More