A 3.8 magnitude earthquake shook parts of Indiana Thursday afternoon. The United States Geological Survey said the epicenter was near Bloomingdale, Indiana -- about 65 miles west of Indianapolis.

The tremors were felt throughout the state, with light to weak shaking reported east of Indianapolis, south of Bloomington and north of Logansport. Light damage was reported west of Bloomingdale and in Illinois. 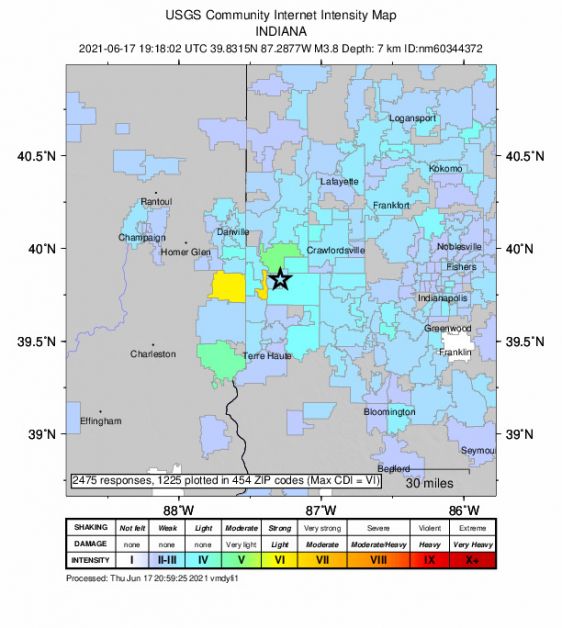 According to the USGS, the earthquake occured in the Illinois Basin-Ozark Dome Region which covers parts of Indiana, Kentucky, Illinois, Missouri, and Arkansas -- bordering the more active New Madrid seismic zone. The agency says the largest historical earthquake in the region was a 5.4 maganitude event in southern Illinois in 1968.

Did you feel the earthquake? You can report your experince to the USGS.

Earthquakes are less common in the central and eastern parts of the United States compared to the west, but they are typically felt over broader areas. The USGS says an earthquake east of the Rocky Mountains can be felt across an area up to 10 times larger than that of a similar magnitude quake on the west coast.

Tags:earthquakeBloomingdaleParke CountyUnited States Geological Survey
Support independent journalism today. You rely on WFYI to stay informed, and we depend on you to make our work possible. Donate to power our nonprofit reporting today. Give now.